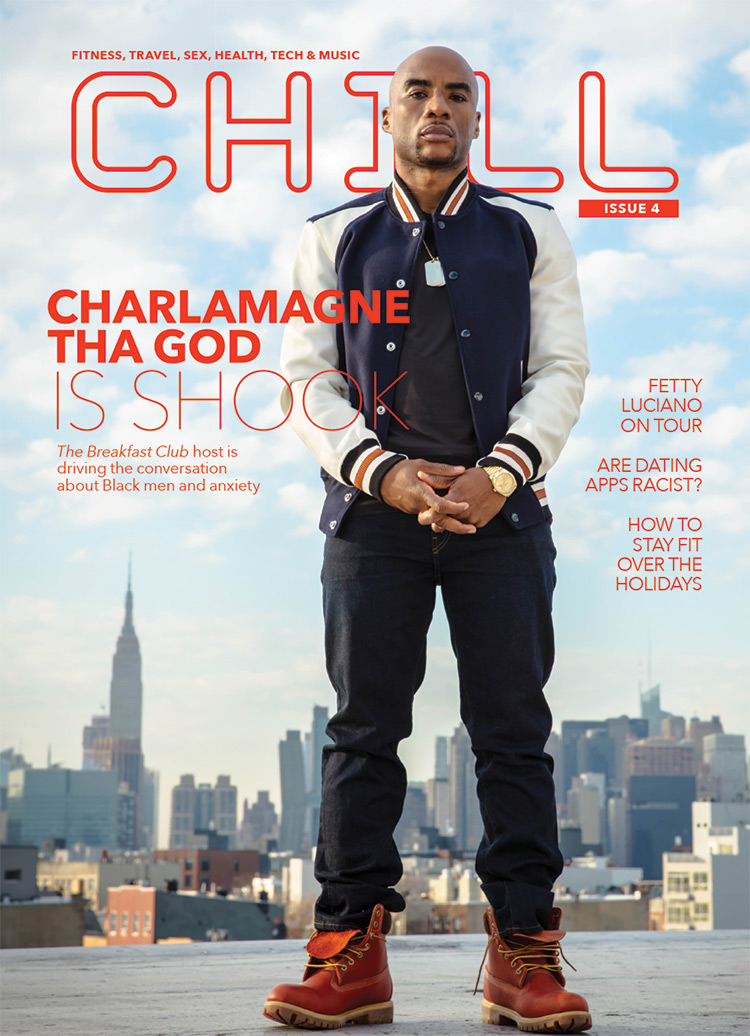 For a guy who used to sling dope as a kid in Moncks Corner, S.C., you would think Charlamagne tha God, now 40, would have no problem getting high. But sitting on a bed at the SLS, a luxury hotel in Beverly Hills, Charlamagne was having a meltdown, and he was sure it was the weed.

Damn, I’m about to OD on weed, and my wife hates me for not making her squirt, he thought. He and his wife, Jessica Gadsden, smoked a joint of Green Crack — or Blue Dream or some other Los Angeles chronic someone gave him to calm his anxiety — and now he was “curled up in the fetal position like Smokey in the chicken coop in Friday.”

Charlamagne was on a book tour for his first New York Times bestseller, Black Privilege: Opportunity Comes to Those Who Create It. His thoughts were spiraling from worry over his book tour falling apart (even though hundreds of people were showing up at bookstores to see him) to the fears of an apocalyptic earthquake hitting California, or a white supremacist letting “the mayonnaise fly by shooting up the Black Privilege tour stop in Burbank,” to the concern about whether he could still make his partner of two decades orgasm — and, if he couldn’t, would that lead to divorce?

This is the mind of Charlamagne tha God on non-stop anxiety. As his panic attack unfolds, his wife asks if he’s going to run out of the room naked, pulling a Martin Lawrence in the streets of L.A.

What’s surprising is not that Charlamagne (nee Lenard Larry McKelvey) has anxiety, PTSD, and panic attacks; but that he’s one of the few male celebrities (especially among men of color) who is willing to admit it and talk publicly about his struggles with mental health. He does more than that in his new book, Shook One: Anxiety Playing Tricks on Me.

The cohost of the wildly popular nationally syndicated radio show, The Breakfast Club, Charlamagne is one of the more compelling media personalities out there, a guy who helps drive national conversations around race, politics, hip-hop, and gender. He does so despite the risk of sometimes making public flubs on everything from colorism and Afro-Latina culture to LGBT issues (case in point: an episode in which a guest made a transphobic remark, which  Charlamagne didn't shut down fast enough — a mistake he admits he learned from, especially after meeting with trans people and learning what their real lives were like).

In fact, Charlamagne, who worked his way up in the industry doing small-time radio in South Carolina, seems constantly open to learning and refreshingly willing to admit to his mistakes. He often revisits topics after learning more, something that has endeared listeners to him over the years.

The co-host of the popular podcast Brilliant Idiots and an executive producer with his own production company, CThaGod World, had less of a big break and more a steady climb. His work on radio, led to hosting MTV's Uncommon Sense With Charlamagne for five years. The format, a roundtable panel of guests discussing politics, media, and current affairs, suited Charlamagne, who likes to bring multiple voices to the table. Now a bonafide media personality and social media influencer, Charlamagne's popularity both on radio and on TV was solidified on, among other shows, The Wendy Williams Experience on VH1, MTV’s Guy Code, and MTV2’s The Week in Jams.