An Out Gay Black Man Is Dominating Sports Journalism 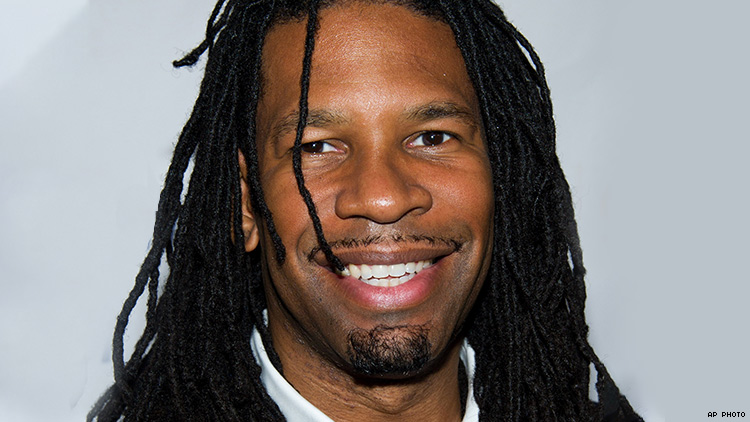 LZ Granderson shatters the mold of the stereotypical sports journalist. For starters, he's a trained and accomplished actor. Plus the 46-year-old Detroit native is the co-host of Mornings with Keyshawn, LZ and Travis on ESPN Radio Los Angeles. He's also written for CNN, ESPN, the Atlanta Journal-Constitution, and ABC, among others, and he’s the newly created sports & culture columnist for the Los Angeles Times.

Furthermore, he is an out gay man blazing a pioneer’s trail through the traditionally heterosexual industry of sports. Simply put, LZ Granderson is a whole new type of sports personality: accomplished, multi-talented, very woke, and unafraid to make his voice heard.

The man is a jack of all trades, but Granderson has always been a writer at heart. He wrote for his school newspapers throughout high school and college, but it was his love for the stage that sent him to Western Michigan University.

“I had a theater scholarship,” Granderson says. “I was acting in high school. I had an amazing teacher by the name of Marilyn McCormick who just retired like two years ago who was responsible for so many young people growing confident and finding their own voice throughout the years. One of my professors was a professional working actor. He made a famous commercial at the time for Apple Computers and was on A Different World.”

These connections led Granderson to his first film role in Zebrahead. “I was just really fortunate to get cast. And I still have friendships from that film. John Seda, who I was actually in a fight with in that film, I was just texting him last weekend.”

A big decision awaited him for his next major film, though. He had the opportunity to appear in To Sir, With Love II with Sydney Portier. There was just one problem: he was in the final semester of college and past the drop date for his classes. Still, the choice was inevitable so he bit the bullet and took a hit on his GPA. There was no way he could turn down that opportunity.

The transition from actor to writer was not as difficult as one might expect for Granderson personally. He had always been a writer, viewing it as a gift from God that he eventually was able to turn it into a paycheck. “It wasn’t like I was forcing anything. It was a very natural transition for me," he reiterates. "Even through college I was working for the student paper. And I had internships and worked for the local newspaper. So even as I was pursuing an acting career, I was also working on my craft as a journalist, as a writer.”

While Granderson was more than qualified and ready to work as a sportswriter, the established sports media at the time wasn’t quite as ready to accept an out gay man into their fiercely heterosexual domain.

“It’s interesting because in some ways the industry of journalism was covering homophobia in sports while not addressing the homophobia that was in the newsroom. And to be an openly gay person, you see this sort of hypocrisy that was both frustrating as well as enlightening because it became apparent to me that part of the barrier to openly gay athletes wasn’t simply the people answering the questions, but also the people asking the questions.”

Granderson described an industry that seemed intent on perpetuating the myth that a gay man could not be trusted in a men’s locker room. Writers would ask questions designed to put athletes in a no-win situation. Over time, attitudes slowly changed as the sectionality of sports, politics, and race became more prominent, accepted, and embraced.

“I think as news coverage of that intersection became more nuanced, the athletes themselves and sports in general was able to follow suit. So I think the gatekeepers of media had something to do with the attitudes as much as the athletes and the coaches themselves. That being said, as society has evolved, so has sports.”

There is still no out gay athlete in the major leagues of football, basketball, and baseball — last year, soccer player Collin Martin became the only out gay man in the league. Granderson remains optimistic, though.

"I do believe that when I first started working as an openly gay journalist in the '90s, the attitudes of the country and sports in general have changed for the positive in a dramatic fashion.”

Granderson’s latest LA Times is the perfect perch to observe and write about the sectionality of sports and society. “My job is to look at the tentacles of sports and sports culture. Looking at all the ways both X’s and O’s as well as financial, political, and culturally the way that sports, particularly Los Angeles sports, affect the community and the country as a whole.”

The sports world is experiencing a renaissance of sectionality, where an athlete’s value exists not just on the playing field or court, but also in the court of public opinion and discourse. With his words and actions, Granderson is at the forefront of change. He’s the renaissance man of sports journalism, and is loving life while doing it.

Of course, there always remains an unchangeable constant, especially for a Detroit native like Granderson. It’s an age-old question that has perplexed long suffering fans, young and old alike. Will the Detroit Lions ever win a Super Bowl?

“I may not be alive to see it, but I’ve been around the block enough times to say never say never. So yes, I believe the Lions will one day win a Super Bowl."

For Detroit’s sake, let’s hope Granderson is as right about the Lions as he is about pretty much everything else.