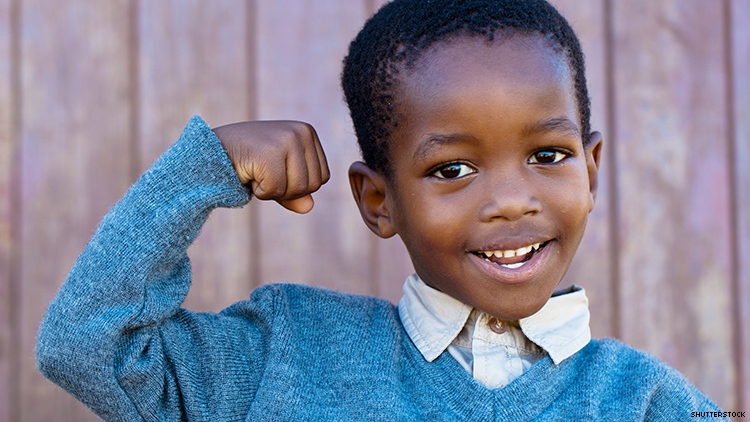 “The Best A Man Can Get” brand, Gillette, acknowledges their role influencing culture.

Gillette recently released a two-minute commercial that looks at what it is to be a boy in this day and age. The spot shows many of the experiences boys are faced with around images of masculinity, and more specifically, toxic masculinity. Some of the references are to bullying, unwelcomed touching of women, unwarranted violence, and some generalizations that men and boys are forced to navigate, often along with the pressures of society.

As the piece comes to a close, the narrator says, “…, because the boys watching today will be the men of tomorrow,” and viewers read “It’s only by challenging ourselves to do more that we can get closer to our best.” Gillette’s response, in partnership with the Boys & Girls Clubs of America, is the The Best Men Can Be campaign, the company’s commitment to “actively challenge the stereotypes and expectations of what it means to be a man…”

And science is saying the same. This as the American Psychological Association (A.P.A.) has released 10 guidelines for psychologists working with people of certain groups, such as members of ethnic minorities and women and girls. But in August, the A.P.A. approved its first set of official guidelines for working with boys and men.

The guidelines suggest that males who are socialized to conform to “traditional masculinity ideology” are often negatively affected in terms of mental and physical health. They acknowledge that ideas about masculinity vary across cultures, age groups, and ethnicities, but also point to themes like “anti-femininity, achievement, eschewal of the appearance of weakness, and adventure, risk, and violence.”

“Traditional masculinity seems to be, in this report at least, conflated with being a pig, or a creep, or a Harvey Weinstein kind of person,” said Laura Ingraham on her Fox News show on Tuesday.

A lot of critics have said that this movement is attack on manhood, but pundits have actually said the opposite. “We see that men have higher suicide rates, men have more cardiovascular disease and men are lonelier as they get older,” said Fredric Rabinowitz, one of the lead writers and a professor of psychology at the University of Redlands said. “We’re trying to help men by expanding their emotional repertoire, not trying to take away the strengths that men have.”

“All of us are born needing, and being able to develop, close personal relationships,” says Judy Y. Chu, author of When Boys Become Boys. “And those are essential to our health. So what does it mean that we socialize boys away from that inherent need?”

The New York Times notes, the guidelines document that men sometimes avoid seeking help from others, including from psychologists, because it could make them look weak. And they note that even when men do seek help, psychologists sometimes go wrong by diagnosing them outwardly, such as with substance abuse problems rather than looking inwardly at issues like depression. The document goes on to speak the impact of issues like race and income on men and boys. For example, men of color, particular those Black and Latino, go to jail more often than white men, even when the crimes are the same.

The guidelines add that men and boys have historically been considered a “normative referent” for psychology. In other words, men — especially white, heterosexual men — were overrepresented in Western studies, and their psychological needs and habits were considered more universal than they actually were.

The guidelines mention that men and boys have historically been considered a “normative referent” for psychology. In other words, men — especially white, heterosexual men — were overrepresented in Western studies, and their psychological needs and habits were considered more universal than they actually were-- i.e. the one-size-fits-all approach.

But professionals are now taking all this into account. “Psychologists are encouraged to see men as being impacted by culture, by race and by relationships, rather than just assuming that there is one sort of standardized set of behaviors,” Dr. Rabinowitz said. “We want people to be aware that men are complex beings.”

And we can all do our part. Men can help rewrite the narrative of unhealthy “traditional masculinity ideology” by challenging stereotypes and preconceptions. No matter what manhood has traditionally looked like to you and for you, recognize that there manhood and masculinity, like so many parts of our humanity, is not monolithic. The response to toxic masculinity is responsible masculinity-- balance, tact, decency, and consideration.

Chill makes it a point to consistently address stereotypes, from those around racial to sexuality to interests to age. For so long, society has given men very limited opportunities to express themselves. The most societal acceptable outlet for generations has been aggression. Men can counter that by continuing to create spaces for men and boys to express themselves heathily and responsibly while recognizing “teachable moments,” times when we can lead the charge of defining responsible masculinity by the example.

But before, we can hold any other person accountable, we must first hold ourselves accountable. Men should be assessing where they may need to “unlearn” to relearn, and recognize that it is a process with many factors to consider, such as race, class, religion, and sexuality. We can continue to make a difference in our world by making a difference within our communities and within ourselves.