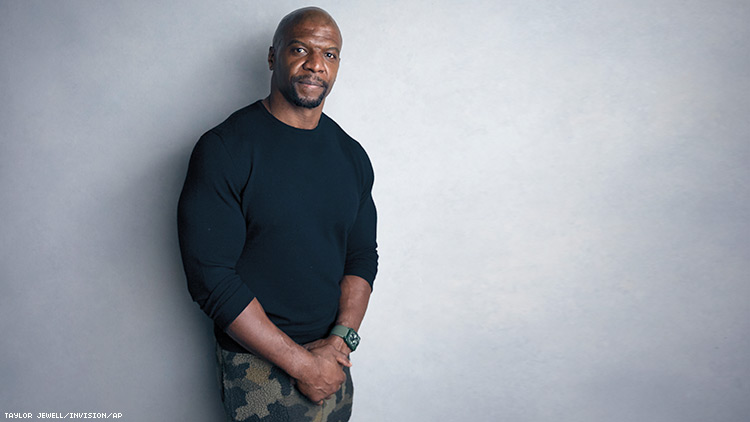 Terry Crews tells us why more men don’t lend their voices and experience to the #MeToo movement — but should.

In powerful testimony before the U.S. Senate Judiciary Committee this past June, actor Terry Crews (star of Brooklyn Nine-Nine) spoke to the importance of protecting survivors of sexual assault by sharing his own experiences. As a child, Crews said he watched his mother suffer assault at the hands of his father. He also told the committee of his own sexual assault in 2016, with the goal of encouraging nationwide implementation of the Sexual Assault Survivors’ Rights Act. Signed by President Barack Obama in 2016, the law enshrines additional rights and protections for sexual assault complainants (including around how rape kits are processed).

“I am a survivor of both domestic violence and sexual violence,” Crews tells Chill. “Like many who have been victimized, you realize instantly that you are behind enemy lines. That’s the phrase I use, because the questions that you get — the arguments of ‘Why didn’t you say this?’ or ‘Why didn’t you do that?’ — and constantly being blamed for what happened to you, for what you are a victim of.”

Crews has been a rare male voice in the #MeToo movement, making a strong statement in his presence and coming forward as a survivor. For many men, doing so is exceedingly uncomfortable and goes beyond just the stress associated with disclosing about experiencing violence or sexual assault. In addition, they are forced to address the many layers that these experiences often bring up for men: including confronting issues around sexuality, strength, and perceptions of masculinity.

For centuries, there has been a societal expectation — especially among men of color — that we are to be protectors. We are told only the strong survive. To be (or appear) weak must be avoided at all cost.

Sexual assault is more often about power than it is about sex, and taking that power from a man, asserting the right to touch him without consent, and making him a victim, can all be very emasculating.

When men do divulge about being put in vulnerable situations, such as getting touched or groped inappropriately, being overtaken, or forced into sexual acts not associated with their sexual orientation, they are often ridiculed for “letting it happen.”

Crews says his experience has helped him “understand and empathize with those who have remained silent. I know how hard it is to come forward. I know the shame associated with assault.”

In September, at the Breaking the Silence Awards celebration, Crews presented Tarana Burke with the 2018 Recy Taylor Vanguard Award. Burke is credited as founder of the #MeToo movement and has built and sustained a platform for people to share their experiences of sexual assault and heal collectively. The annual awards are put on by the I Love Me Foundation, a national organization providing education and advocacy to and for survivors of sexual and domestic violence.

Coming forward to address sexual violence and assault, Crews says, is a little like “digging a tunnel with a spoon.” Referencing Shawshank Redemption, the phrase suggests the long and difficult process ahead — but potential for eventual success.

So how do we change things? By intentionally creating safe spaces for men to speak about their experiences without fear of judgment. By addressing toxic masculinity and reshifting our ways of thinking that men for many years have upheld.

“As I shared my story, I was told over and over that this was not abuse,” Crews told the Congressional committee. “This was just a joke. This was just horseplay. But I can say one man’s horseplay is another man’s humiliation.”