Harlem Writer Is The New Face of Fashion House Brioni 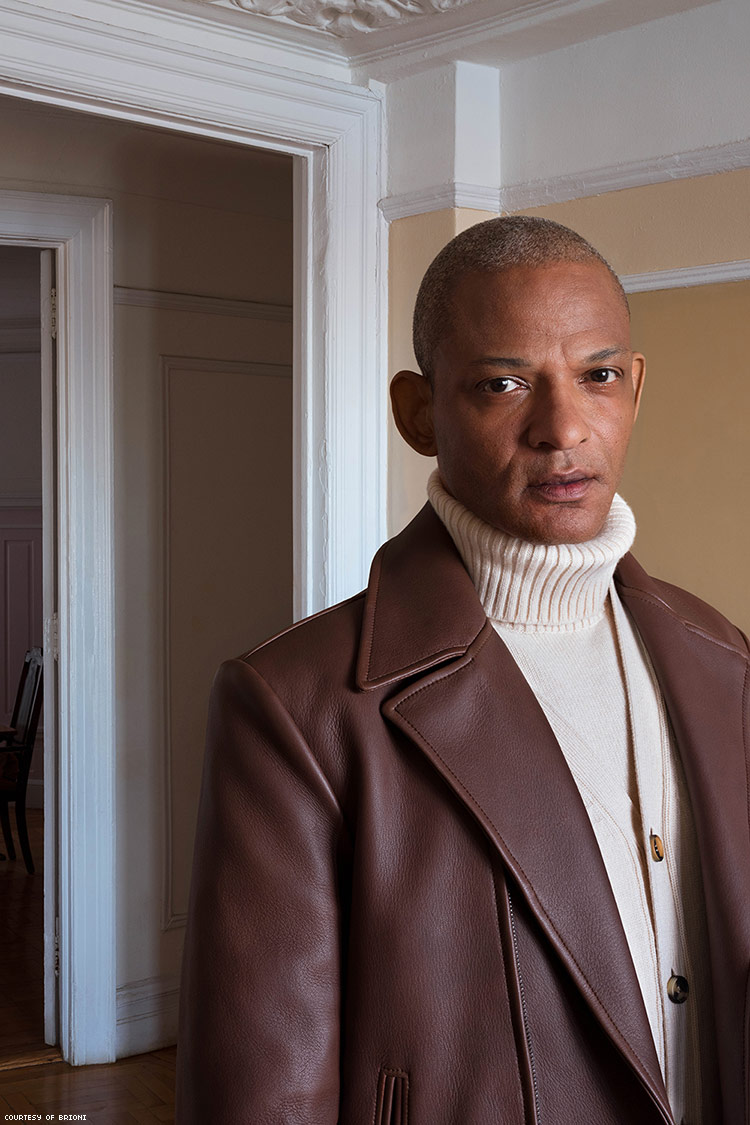 When Daniel Peddle contacted Brian Keith Jackson about being considered for a new campaign with fashion house Brioni Jackson didn't think he had a shot. "I knew a great many people were being considered so I didn’t think much about it, ” says Jackson. Then about a month later he got the job. Shortly thereafter he was, being measured, then later a final fitting at the Brioni store for his bespoke wardrobe.

Peddle is a filmmaker and co-owner, with his life partner, Drew Dasent, of the casting company The Secret Gallery. Nina Nitsche, formerly of Maison Martin Margeila, had just been named the new creative director, and the first woman to head the historic Italian House. Instead of using models, she wanted to use “real” men, in various fields for their Paris Couture presentation. Being part of the beginning of a new legacy intrigued Jackson.

The concept for the campaign was capturing men in their environments,  “so we did the shoot at my place in Harlem. The photographer, Anne Schonharting, is known for being able to create a narrative that brings a sense of space and place, and, in this case, also highlighting the clothes. Honestly, I didn’t expect it to be such a large production. There was a trailer downstairs for catering and make-up and 20 people in my place. It was a long day of shooting. All I can say is modeling is not for sissies. By the end of the day, I was able to see the three images, each a different look, and was quite pleased. The collection debuted in Paris and eventually, the images ended up in the store window of New York Brioni’s flagship store on Madison Avenue. I didn’t know about it until a friend told me he saw them. I went to check it out, took a couple of pics, which is a bit weird. I’m not vain, well, that’s not true, I’m a bit vain, I did a fashion campaign so…, but I don’t really spend much time looking at myself.”

Jackson shot to literary fame with his first novel The View From Here in 1997. Since then the Louisiana native published two subsequent novels as well as writing for outlets ranging from New York Magazine to the London Observer. His third novel The Queen of Harlem, is set before Harlem's redevelopment and depicts the struggle of a man who reclaims his Black identity. Artist Kehinde Wiley named it one his favorite books in 2016.

Jackson and Wiley have been friends since 2001. Wiley,  just graduated from Yale’s MFA program, was an Artist in Residence at the Studio Museum in Harlem, which was like a second home to Jackson. “I was having a get together at my place and a mutual friend, the artist Adia Millett, brought him, thinking we should meet. At the time, there weren’t very many Black, gay guys in our fields, things were just starting to open up in the realm. I think that commonality connected us and we’ve been friends ever since. I’ve worked on various projects with him, particularly on his World Stage project, Brazil to Africa, the documentary, An Economy of Grace, which was shortlisted for an Academy Award for Best Documentary Short, as well as Kehinde Wiley, which was published by Rizzoli. Jackson says it’s always an adventure with Wiley. “We’ve been through a lot together. We were detained for four days in a Black site in the Congo because local officials thought we were American spies trying to influence their election. We had no idea of our location, which I guess is what a Black site is for, and no one knew where we were. Completely off the grid. On the fifth day, representatives from the U.S. Embassy came to get us out. Ever seen that show, Locked Up Abroad? It was kind of like that, but with Black people and no drugs. Anyone who knows me knows I’m not suited for prison. It’s not a cute look. Still, I think it’s important to have people in your life that you can say, 'Remember that time…' But that only works if you continue adding to the story, making new memories together. With Kehinde the story always continues.” 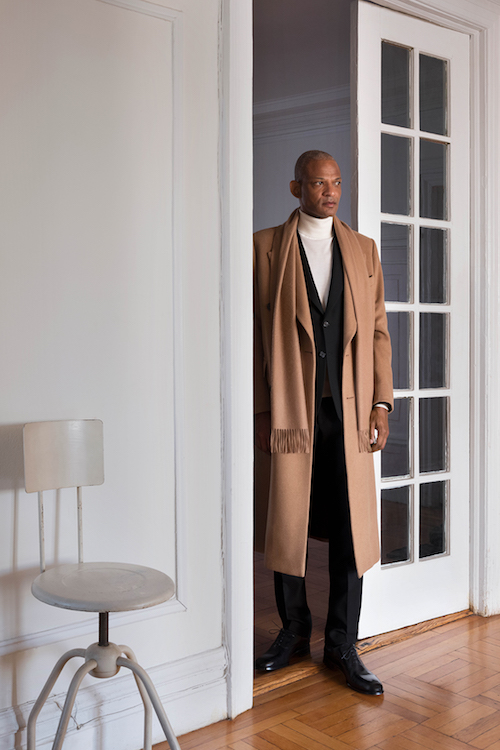 Much of Jackson's ambivalence about how he looks in the Brioni campaign has to do with the fact that as a writer Jackson is often looking within. “The exterior often becomes an aside. It’s hard to watch if you’re being watched. But when your image is in the window of a store like Brioni, you have to check it out. Mark time. The store is on 62nd Street on the Eastside, so as I stood on the sidewalk, looking at myself, I was just hoping no white woman would call the cops on me for just standing there. Crazier shit has happened.” 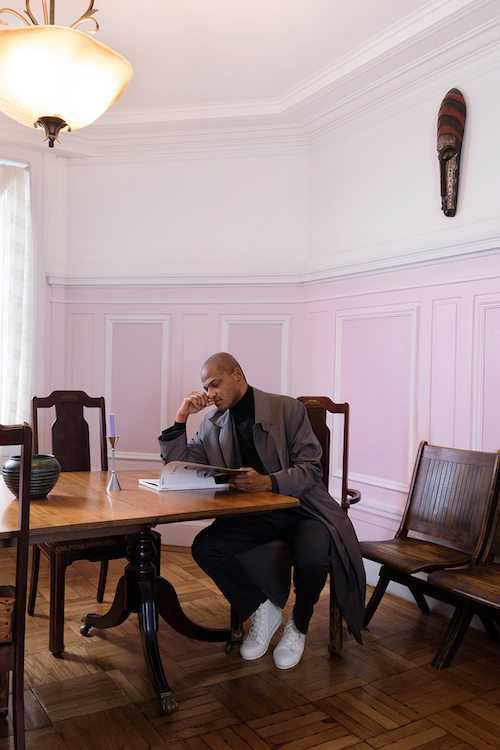 The Brioni project dovetailed with Jackson returning to NYC after living abroad for eight years (Five years in Beijing and three years in Tunisia). “So here I was working with an Italian House, with a German photographer, for a presentation in Paris, that later ended up in the window on Madison Avenue.”

It was a perfect fit. Jackson has always been intrigued by culture and how history is viewed and who is represented within that history. “As a writer, travel or living in another country provides me with a different understanding of life, logic, patience and even love. NYC is home, but I don’t always feel good here, she’s a hard girl, so my passport is always at the ready. It’s not about escaping reality, but broadening the definition of what that means. I’m of the thought, the eyes, heart and soul should always wander and wonder.”

Jackson hopes to have his fourth novel out next year. “I’ve been working on it for a minute, which is how I view life. Sometimes the times catch up with you and other times you catch up with it. The novel is called I.C.U. It’s a coming of age story set in the East Village in 1993. That was a period when HIV and AIDS were front of mind for young, gay men in their sexual prime. Most of the stories of that era were focused on what white gay men were going through, but I think it is important for people of color and women to also be a part of that narrative. I’m a Black, gay man, who’s lived on four continents, traveled the world, I write novels and essays for a living, and have never been in prison or killed, yet. A few of those things, alone, prove challenging, but when you put them all together, it’s made for a peculiar life, but one truly lived. As an artist I need to make sure Black gay men are presented. We are vast and that has rarely been seen. Our stories matter. We are no longer waiting on others to deem us worthy. We are supporting each other in that pursuit. I like that.”