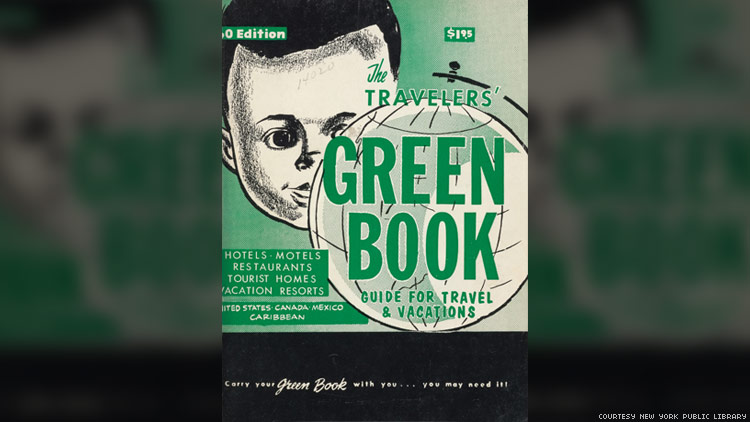 Billie Holiday and Duke Ellington often talked about the extreme racism they experienced traveling the highways of America in the decades before the Civil Rights Movement. While the once-main highway known as Route 66 has been mythologized in pop culture as part of the American Dream, for Black travelers that same trip could be a nightmare. Under Jim Crow laws, white-owned businesses — including gas stations, diners, and hotels — were not required to serve Black people. In some locations known as “sundown towns,” African-Americans had to vacate by dusk or they might be lynched. If two of the most famous Black people of their day feared traveling these roads, what were everyday citizens of color to expect?

Launched by Harlem native Victor H. Green in 1936, The Negro Motorist Green Book was a much-needed guide for travelers of color going on “land cruises in America” as they journeyed from town to town simply hoping for safe passage. The 1937 edition had only 16 pages, but as the years progressed the guide thickened to 100. With his wife Alma, Green compiled information supplied by fellow postal workers throughout the country. Circulation for the guide would eventually rise to 20,000.

“My family had a Green Book when I was young and used it to travel in the South, to find out where we could stop to eat, where we could spend the night in a hotel or somebody’s home,” former National Association for the Advancement of Colored People chairman Julian Bond told NPR in 2010.

With the popularity and affordability of the automobile increasing during the mid-1930s, more Blacks were finding themselves strangers in an often-unwelcoming land. The guide became a must for “Negros on the move.”

Digitized versions from various years can be seen today on the New York Public Library Schomburg Center for Research in Black Culture digital collection (nypl.org). Earlier this year, About Comics released a facsimile of the 1940 edition, which included an ad for the La Fontaine Service cleaners on Edgecombe Avenue in Harlem; listings for hotels, nightclubs, barbers, beauty parlors, and restaurants; as well as a page-long history of the publication.

As Bond told NPR, “You think about the things that most travelers take for granted, or most people today take for granted. You needed The Green Book to tell you where you can go without having doors slammed in your face.” Or be humiliated, beaten, or even killed.

The success of The Green Book soon became enough for Green to quit his postal service job and, in 1947, open a travel agency for people of color. The guide was sold by merchants throughout the country, with Esso (now Exxon) gas stations as its largest non-Black distributor. In the 2010 children’s book Ruth and the Green Book, written by Calvin Alexander Ramsey (with stunning illustrations by Floyd Cooper), the author wove Esso’s sponsorship into the narrative.

Ramsey also produced a 2005 play detailing the life of the publication. In 2015, he told The New York Times, “Green’s dream was that the book would not be needed one day. But he didn’t live to see it. He died in 1960. The 1964 Civil Rights Bill was the dream Victor wanted. He was hoping equality would mean his company would go out of business. After he died, his team honored that by closing down the company and no longer publishing the Green books.”

In recent years, others have put in the work to keep the memory and mission of The Green Book alive. Celebrated documentarian Ric Burns will include the book in his upcoming film Driving While Black, while the Tumblr, “Mapping The Green Book,” offers insight and photos of Black travel in the ‘40s and ‘50s.

In 2017, The Root sent writer Lawrence Ross on the road with a 1957 edition to see what remained in various locations noted in the book. “Once I arrived at a city, I would open up the book, choose the restaurants, hotels, and boarding houses,” Ross told Marriott Traveler. “Then I would put it into my GPS and drive to the places.” As Ross would discover, most of the original businesses no longer exist, but the guide itself remains monumental. Though it’s been 52 years since the last edition was published, the significance of The Green Book still matters.