5 Things You Need to Know to Watch the Ryder Cup 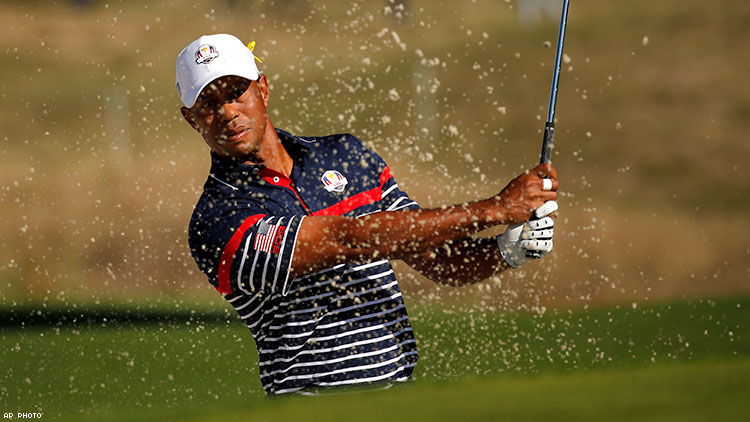 Tiger Woods at a practice round for the 2018 Ryder Cup on Thursday at Le Golf National in Saint-Quentin-en-Yvelines.

This exciting international event has morphed into the antithesis of the traditional golf tournament.

1.    What is the Ryder Cup?
Every two years the United States and Europe field teams of gladiators armed with nothing but drivers, irons, and putters. They are then sent into a modified Thunderdome of fairways and greens for a battle to the death before tens of thousands of crazed and bloodthirsty spectators. It’s a wild scene like none other in all of professional sports. Human sacrifice, dogs and cats living together, mass hysteria! Actually, the Ryder Cup is a biennial tournament between two teams of twelve selected golfers representing the United States and Europe. The first Ryder Cup took place in 1927 and originally featured only the U.S. and Great Britain. It was later expanded to include Ireland and then the European continent. This is the 41st Ryder Cup.

2.    Where and when is it being played?
The tournament rotates between courses in the United States and Europe every two years. This year’s tournament takes place on the Albatros Course at Le Golf National just southwest of Paris, France. Tournament play begins Friday, September 28, and concludes on Sunday, September 30.

3.    What is the format?
The Ryder Cup features various forms of match play. The first two days feature foursome matches. In one style, each team has alternating golfers playing one ball. The other style has each golfer playing his own ball. In both forms, the team with the lowest number of strokes wins the hole and earns a single point. If the teams tie, they “halve” the hole. The team with the best score wins and play continues until a team is mathematically eliminated or there is a tie after 18 holes. Sunday features singles matches where again the lowest number of strokes wins the hole and the best cumulative score wins the match. Each team has a coach who determines the pairings and sets strategy for the manner of play.

4.    What can I expect from the golfers?
This is the granddaddy of the international tournaments. While both teams are composed of golfers who play together on the PGA circuit and are for the most part friends, there is something special about representing one’s country rather than just playing for personal glory. Each team demonstratively supports their teammates in ways not normally seen in a professional golf tournament. This is especially true in recent years. This is the All Star game of professional golf, but unlike other sports everyone is trying their hardest to win and the play is far more intense throughout.

5.    Why should I watch?
Golf tournaments are notoriously boring for some, especially when watching from home on television. Fans and players are polite and respectful, announcers speak in hushed tones, and the mood is more of what one would expect to find in a library rather than a sporting event. Well, you can throw all the niceties out the window at the Ryder Cup. Fans have grown increasingly boisterous in their vocal support of the home team in recent years, and often just as equally loud in their taunting of the visiting team. This is especially true as the day progresses and the alcohol consumption increases. Watching a golf tournament in person is unlike any other sport. Fans are mere feet away from the golfer and can follow them over the several miles players must walk to complete a round. Irish golfer Rory McElroy and American Patrick Reed played a classic match in the last Ryder Cup at the Hazeltine National Golf Club in Chaska, Minn. The play was truly incredible as McElroy and Reed battled for birdies and pars, but the interaction between player and fans was simply off-the-wall. Reed celebrated each stroke with the American spectators like they’d all won the lottery, while McElroy pointed and taunted and angrily screamed back at the fans with each of his successes. The Irish superstar gave as good as he got from the inebriated fans for nine holes but then the adrenalin wore off and his play suffered. Minnesotans have long winters with nothing to do for many but ice fish and drink, so McElroy’s drop-off in both play and banter was like throwing fresh meat to the ravenous fans at a Roman gladiatorial match. He withered under the crescendo of verbal assaults, and eventually lost the match. You can probably expect the same type of behavior from the fans in France this year, with the only difference being a finer vintage of wine consumed rather than our typical watery pilsners. In short, if you want to watch an MMA-style golf experience both from the best players in the world and thousands of highly-inebriated fans, then perhaps you should tune in this weekend and watch some of the Ryder Cup. Excessive drinking and inappropriate behavior optional.