Why LeBron James And The Lakers Make A Great Team 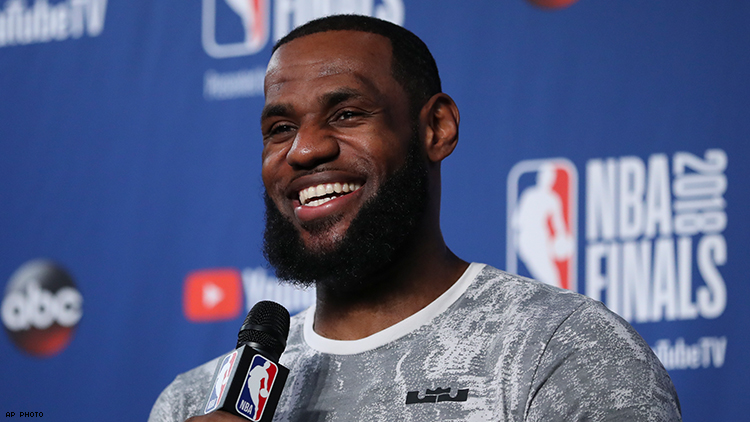 The King of Basketball is coming to Los Angeles, but is it really a slam dunk for the NBA?

The NBA universe is buzzing about the free agent king of basketball, LeBron James, who recently signed a four-year contract with the Los Angeles Lakers. Now, even Las Vegas gives the Lakers the second or third best chance to win it all this season — somewhat prematurely, perhaps. But whatever the odds, Showtime has returned to Staples Center.

While the Golden State Warriors have won three of the last four NBA Finals, beating James and his Cleveland Cavaliers in each of those series, the run-and-gun ballers from the Bay Area are relative newcomers to playing for championships. James, on the other hand, has been to a mind-numbingly ridiculous nine straight Finals appearances. (He won three out of nine.)

James’s stat line from last season is proof that at 33 years of age, he is still the most dominant player in the game today — he played every game, and averaged 28.6 points, 8.6 rebounds, 9.1 assists, while shooting 54.2 percent from the floor in a league-leading 36.9 minutes per game. His 6’8” and 250-pound body is a finely tuned machine that is a testament to his year-round conditioning.

But the question remains: Why did the most dominant player in the game today choose to play for the Lakers?

First and foremost, it is generally understood that James came to Los Angeles not just to play for the Lakers, but also for the quality of life it provides his family. Before he is a basketball player, the star is a husband and a father. He made it perfectly clear at the end of last season that the decision was going to be one that took his family into account.

James owns two homes in the Los Angeles area. His eldest son LeBron “Bronny” James is rumored to be enrolled at sports powerhouse Sierra Canyon High School in nearby Chatsworth, Calif. By choosing the Lakers, he is doing what is best for his family. There is also a myriad of opportunities for his post-basketball life. It is an open secret that he aspires for a Hollywood career, much like Academy Award-winning Bryant has done before him. By locating to Los Angeles, James will be able to provide what is best for his family and prepare himself to have a successful career after he retires.

Additionally, on the court, James has a team of promising young players who are hungry to win. Depth counts in today’s fast-paced game, and the Lakers have the potential to go nine or 10 deep with a mix of savvy veterans and quality younger players who can wear out opponents with their youthful stamina and play.

The Lakers have drafted wisely with players like Lonzo Ball, Brandon Ingram, Kyle Kuzma, and Josh Hart, all of whom are cerebral athletes but also quality individuals. They are the quintessential heady gym rats who know and love the game — just the type of players with whom basketball genius James loves alongside him in crunch time.

The Lakers coach, Luke Walton, won two championships with Bryant and Gasol as a player, and one as an assistant coach with the Warriors. In fact, Walton was the interim coach when the NBA record of 24 consecutive Warrior victories that opened the 2015-2016 season — while Steve Kerr was unavailable and dealing with medical issues. Walton also happens to be the son of Hall of Fame center Bill Walton.

The Lakers are playing the long game as well, setting themselves up to make another big acquisition this season or next. Rumors persist they are interested in trading with the San Antonio Spurs for disgruntled forward Kawhi Leonard, one of the top two-way players in the game today.

Leonard has made clear his desire to play in Los Angeles either this season via trade or next season when he can sign as a free agent. The Lakers have the assets to make a trade now or can sit and wait if the asking price is too high, taking their chances that Leonard will sign with them when he becomes a free agent after the season. Still, nothing is certain, and Leonard may choose to sign elsewhere much like Paul George recently did with the Oklahoma Thunder. Even if that happens, there are still plenty of quality players set to hit free agency next season.

Perhaps the most intriguing of these new drafts is Klay Thompson, whose father Mychal was a key role player on the 1987 and 1988 championship teams and is currently the Lakers radio color commentator. Damian Lillard, Jimmy Butler, Kemba Walker, and others may also find the chance to play with James under the championship banners at Staples Center too irresistible to pass up.

By signing tough and drafting tough defensive playmakers, the Lakers and James may be signaling a transition in his style of play. Rather than being the primary ball handler, James may play more around the perimeter while others drive and kick it out to him for an open three. Instead of constantly driving to the hole, he might make use of his size advantage by posting up against smaller defenders. Simply put, what LeBron James fans see in Los Angeles could be vastly different but just as deadly as the player they watched in Cleveland and Miami.

Regardless of further changes to the roster or James’s style of play, the expectations are high. The Los Angeles Lakers are about one thing and one thing only: winning championships. A second-place finish is considered a losing season in La-La Land.

While management and fans may be willing to wait another year to contend for a title perhaps, there will be major grumblings if the team is not in the playoffs this season. Laker greats — Magic, Kareem, Kobe, and Big Game James Worthy — all remain with the team in either an official or unofficial capacity. There is nothing like having all those Hall of Famers, and all those championship banners hanging overhead to remind James what is expected of him. But perhaps that is the main reason why he chose to sign. Namely, that he wanted to be tested and challenged.

If James wins a championship for the greatest basketball franchise of the last 50 years, he might just be crowned the greatest basketball player of all time. No matter what happens, the Lakers and LeBron James are set for an exciting four years. It’s show time again in Los Angeles, and the NBA world is most certainly better for it.