Tiger Woods Is On the Come Up 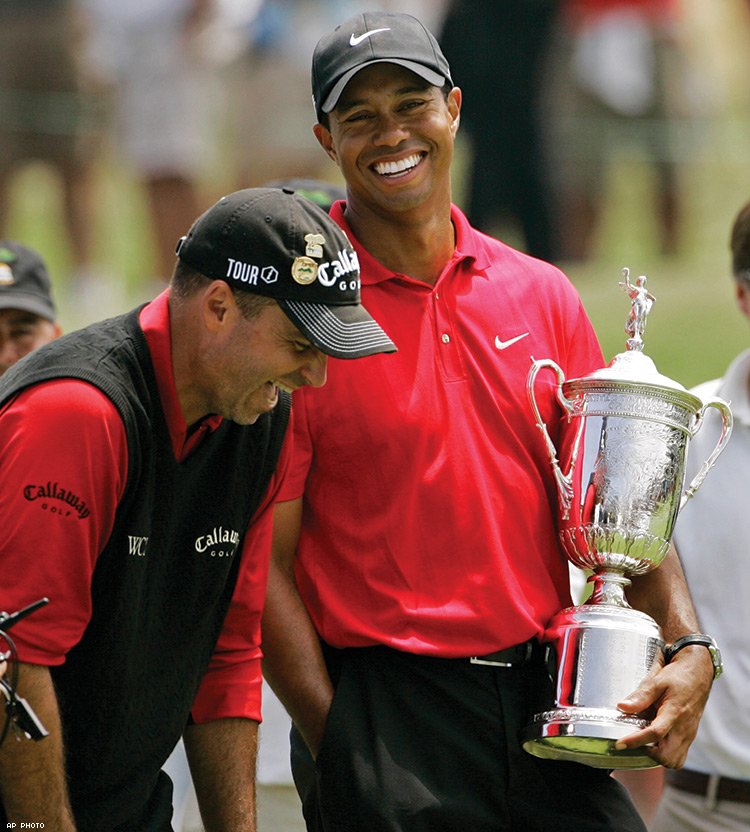 A look-back at legendary golfer Tiger Woods’ career-making victory at the 2008 U.S. Open.

The U.S Open aims to be the most difficult of the four majors in golf. It is as much a test of the golfer’s mental fortitude as it is his ability to play the game: the rough is cut higher, the fairways are deliberately narrow, and the greens are fast and unpredictable. The simplest of errors can yield devastating results. Where other tournaments can be won with scores of double-digits under par, at the U.S. Open an even par scorecard is often enough to net a victory.

For the amateur duffer watching at home, there is no small degree of satisfaction watching professional golfers break under the strain. A ball landing inches off the fairway can easily result in a triple bogey or worse, quickly sending a player from contention to an early exit. It is, quite simply, the toughest test in the game. You need to be at your physical and mental best to even have a chance to win.

Unless, of course, you’re Tiger Woods.

Two months before the 2008 U.S. Open at the famed Torrey Pines South Course in La Jolla, Calif., Woods underwent a third arthroscopic surgery on his ailing knee. The doctors repaired damaged cartilage but left untouched the ruptured anterior cruciate ligament (ACL) suffered the year before during the 2007 British Open. Woods then suffered a double stress fracture in his left leg during the rehabilitation process. When told he needed to call it quits for the rest of the season, his response was classic Tiger: Not only was he going to play in the upcoming U.S. Open, he was going to win.

Rocco Mediate was an amiable professional golfer who was well-liked among his peers but mostly unknown to the public. In the 23 years since turning pro in 1985, he had notched a mere six wins. His swing was smooth but unorthodox, more akin to what you’d see from a senior citizen on a public course than a professional golfer in the most difficult of the four majors. The jovial 45-year-old was the 158th ranked player when he teed off in the 2008 U.S. Open, and even wore his player ID badge under his sweater just in case he wasn’t recognized by the course personnel. Few expected him to make the cut and nobody—except perhaps Mediate himself—gave him a chance at winning.

After the first round, Woods was playing poorly and tied for 19th place. Mediate was one stroke behind the leader, and continued to play well while Woods dropped even further back. He was in obvious pain and limping. Many observers wondered if he’d even finish the round. Woods started his back nine with a tee shot that sailed wide right, rolling just off a cart path. With his steel-spiked shoes on the concrete path, he swung and hit a ball that landed on the green and gave him a good chance at birdie. In the process, though, his shoe slipped and there was a noticeable crunching sound in his leg. Woods was clearly suffering, but as he walked to the green he had an epiphany. He had just endured the excruciating pain of this new injury, and still hit a shot that good. It was as if a switch had been flipped. He realized he would not only play through the pain, but that he could also win.

He went on to birdie four of the next five holes. By the end of the round, he and Mediate were tied for second place — but Woods then opened the third round by dropping three strokes on the first two holes. At the 13th hole, he was in trouble again. He sliced his tee shot wide right and was looking at a difficult recovery just to make par.

Instead, he hit what looked to be a perfect shot into the hole on the fly. Unfortunately for Woods, though, the ball bounced out and kept rolling to the back of the green. He was now facing a long downhill putt that broke to the left some 10 feet from the hole. If the ball did not go in the hole, it would roll another 30 feet off the green. But this was Tiger, so he simply sunk the putt for an eagle. He followed this with a chip-in from the rough for birdie on the 17th, and he capped off the day with another long putt for eagle on the final hole.

By the end of the round, Woods had the lead while Mediate sat two strokes back in third place. In the 13 previous major tournaments where he was tied or better going into the final round, Woods had come away with the win. But as he approached the final hole on the final Sunday of the 2008 U.S. Open, he had dropped to one back of Mediate, who was already in the clubhouse watching the play on television. Woods was clearly in pain, wincing and doubling over as his tee shot went left into a fairway bunker. His next shot went wide right into the rough. With water in front of the green and a bunker on the right, there was only a small window in which he could safely land the ball. Woods responded with the required shot, which he then sank for a birdie. Woods and Mediate were tied for the lead at the end of regulation.

Most other tournaments would send players to a sudden death playoff, with the first golfer to win a hole awarded the victory. But the U.S. Open never makes anything that simple. Both golfers would have to survive an 18-hole playoff the following day to decide the winner, and even that wasn’t enough as they were tied again after the playoff. Only then did they go to a sudden death format and it was on the 91st hole of the tournament that Mediate finally cracked. Woods won the hole and the 2008 U.S. Open with a par putt.

It was the crowning moment of Wood’s storied career. He was at the top of his game and it appeared he was on his way to smashing Jack Nicklaus’ record of 18 majors. Sadly, though, this would prove to be the last of his majors’ victories to date. Since that win, Woods has undergone multiple surgeries on his knees and back, including ACL reconstruction and spinal fusion. Even more difficult, perhaps, was the very public disintegration of his personal life.

It’s been a long road back for Woods, but at age 42 he finally appears to have recovered physically and mentally. He seems at peace with himself for the first time in a long time. His game is wiser now and he’s content to stay within his abilities and settle for pars, instead of always taking a riskier route. He appears more relaxed — but that dominant aura that makes others wilt under pressure is strong as ever.

With his two-stroke win at the season finale Tour Championship, Woods now has 80 tournament victories and is just two off the record 82 held by Sam Snead. He still sits at 14 majors, trailing only the legendary Jack Nicklaus (who won 18). Will he catch or surpass the Golden Bear for the one record he seeks above all others? The odds are against him, but those five days at Torrey Pines where he conquered not only the game’s toughest test, but also bypassed the accepted laws of medical science prove one should never count Woods out.