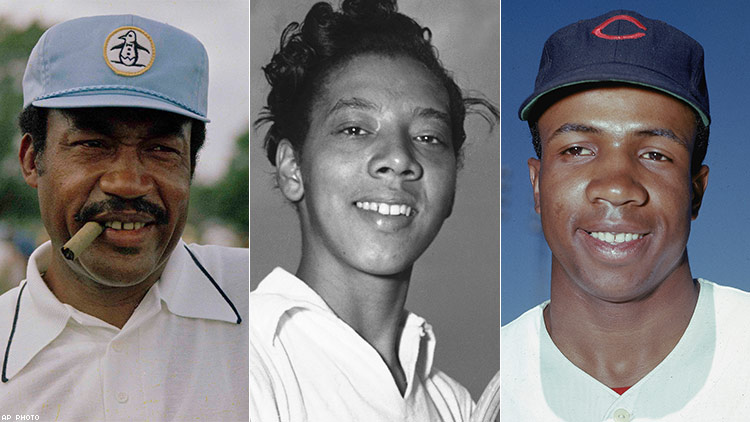 You may not recognize their names, but these five Black champions paved the way for today’s athletes of color.

It’s easy to take for granted the harsh struggle of past pioneers, fighting against prejudices that denied the best athletes a place on the field or court. Most people know that Jackie Robinson broke the color barrier in baseball, but how many people know who made the same breakthroughs in basketball, hockey, tennis, or golf? These heroes deserve our recognition because their resilience and strength made possible the successes of many athletes today.

Frank Robinson was one of the greatest hitters in baseball despite playing in an era of dominant pitchers like Sandy Koufax and Bob Gibson. Perhaps his most important achievement, though, was when the Cleveland Indians made him the team’s player-manager in 1975 and thereby the first Black manager in Major League Baseball. True to form, Robinson hit a home run in his first at-bat in this historic role. He went on to become full-time manager for Cleveland, as well as the San Francisco Giants, the Baltimore Orioles, and the original Washington Nationals (who later became the Montreal Expos).

Althea Gibson was a true jack-of-all-trades. She was a professional golfer and tennis player, but also an accomplished singer, musician, actress, administrator, and activist. She was a fearsome and ferocious athlete who many believe could compete in today’s tennis game. She was the first black athlete, male or female, to win at Wimbledon. Sadly, though, Gibson suffered the injustices of her era as much as Jackie Robinson. She was not allowed to stay in many hotels because of Jim Crow laws, and whites-only country clubs in the South (and the north) refused to let her play in tournaments at their establishments. These barriers, combined with the generally low prize winnings of the time, meant that Gibson dealt with financial difficulties throughout her life. Medical problems eventually left her penniless. But when multiple tennis organizations refused to help defray these costs, the world community responded by raising close to a million dollars in donations. Gibson is still regarded as one of the greatest and most influential female athlete in history.

Tiger Woods is back in the news with his recent comeback, but he is not the first Black golfer on the Professional Golfers’ Tour. That honor goes to Charlie Sifford, who broke the color barrier on the professional links in 1954. He became the first Black winner of a fully-sanctioned PGA tour event with his victory at the 1967 Greater Hartford Open, and followed it up with a win at the Los Angeles Open in 1969. Exclusive golf clubs of this period were bastions of racism and exclusion. Blacks and other people of color were only permitted as servants and employees, never as members or players. When Sifford did finally break the barrier, he suffered horrendous abuse from members of these clubs and some of the public. However, the golfer famous for always having a cigar in his mouth, did garner some recognition and accolades later in life. Sifford was inducted into the World Golf Hall of Fame in 2004. Perhaps the most crowning of his achievements came in 2014, when President Barrack Obama awarded him the Presidential Medal of Freedom.

Canada is known for hockey players, and one of the most significant is also one of the country’s least known. Willie O’Ree is recognized not so much for his achievements on the ice in the National Hockey League, but for breaking the NHL color barrier. He spent most of his time playing for the World Hockey League (a minor league), on the Los Angeles Blades and the San Diego Gulls. After playing two games in the NHL in 1958, O'Ree went back to the minors – then returned in 1961 to play 43 games for the Boston Bruins. After that, he returned exclusively in the minor leagues. Like elsewhere in professional sports at the time, he was subjected to nightly racist abuse from fans. O’Ree would later remark that he received far more racial abuse and prejudice in the United States than in his home country of Canada. O’Ree will be inducted into the NHL Hall of Fame in November of 2018.

Prior to 1951, there were no Black players in the National Basketball Association, but that was to change with the drafting of Chuck Cooper, Nat “Sweetwater” Clifton, and Earl Lloyd. Both Cooper and Clifton were drafted higher than Lloyd, but scheduling gave Lloyd the distinction of being the first Black to actually play in an NBA game when his Washington Capitols took on the Rochester Royals on October 31, 1951. Seven games later he was drafted into the U.S. Army to fight in the Korean War. When he returned after two years of service, he was picked up by Syracuse Nationals, the forerunners of today’s Philadelphia 76ers, and played six seasons there before finishing out his playing days with the Detroit Pistons for two seasons. Like others breaking through the color barrier, he suffered racial prejudice. Lloyd was refused service at hotels and restaurants, and was the subject of racial epithets hurled from the stands. Most of his teammates were generally accepting of him, as they had played on integrated teams in college. After he retired from playing, Lloyd went on to coach. He became the league’s first Black assistant coach in 1968, and their second Black head coach – both times with the Detroit Pistons. For his historic efforts and achievements, Lloyd was elected to the Naismith Basketball Hall of Fame in 2003.