Can This Black Man Change Media For Better? 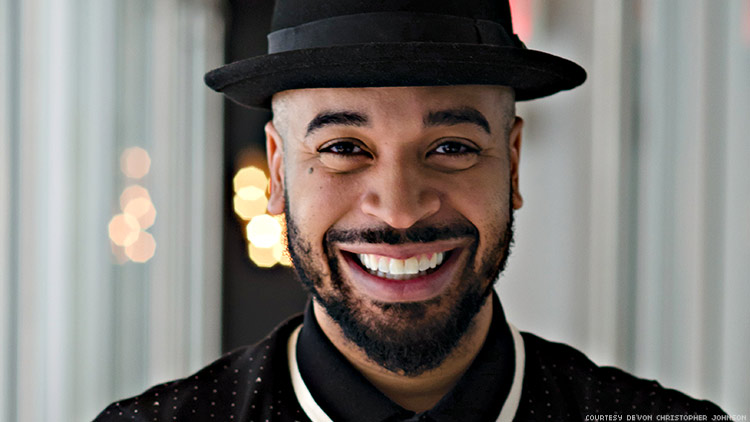 The founder of the popular Black-owned and operated media company wants to change the world. Can he do it?

De’Von Christopher Johnson, founder of BleuLife (bleumag.com) — a multisensory media company focused on fashion, music, and culture for the multicultural millennial — has found himself in the sweet spot between “arrogance and ignorance.” But he’s no fool. The Harvard graduate values education, but more than that he honors the support and opportunities he’s been afforded.

“On a spiritual level, I get that my free existence as a Black man in the United States rests on the shoulders, the backs, the feet, the hands of generations before me who could not even imagine life today — being a businessowner, owning Black media, and being in charge of the narrative and the message,” he tells Chill. “I believe that ‘he who controls the media controls the mind.’”

BleuLife is “a full-service media company — we are digital, we’re experiential. We are a gateway,” Johnson says of BleuLife. “It’s become not just a gateway to celebrate men of color, but also a validation of our talent.”

The company’s bimonthly print publication, Bleu, covers fashion, travel, and culture, while its monthly sister publication, Bombshell, looks at content for multicultural women. With various events and publications that showcase everything from business to empowerment, BleuLife is indeed a 360 degree experience.

Since its inception, Bleu has set out to connect brands with key demographics through quality and intentional content.

“It started with me and my friends sitting around my apartment in Harlem, feeling inspired — like the New Negro Renaissance,” he explains. “‘What do we do? What’s our mark? What are we going to make happen?’ And after several rounds of Ketel One and cranberry, we decided that we were going to start a magazine. It sounded like a good idea, and we thought, ‘Why not?’ Then we started Bleu.”

Having studied journalism, business, and communications, Johnson is determined that Bleu tells accurate stories as a brand. “I learned very early on that if I want to change the narrative, I can’t do that as a spectator, I have to do it as a player in the space.”

As someone with the ideal blend of confidence, tenacity, and support, Johnson cites his family, particularly his mother, for his determination. “I was never told ‘No,’ as a child. There were rules, there was discipline, but nobody told me ‘No.’”

It was this liberty that gave Johnson, a Long Island native, the wherewithal to follow his dreams. He started Bleu 13 years ago and went full-time into the venture nine years ago. “A lot of what I’ve done career wise has been about taking chances.” He laughs, “I started Bleu and had no clue what I was doing. I don’t think I had the knowledge to know just how hard it was — how hard it is.”

Even still, Johnson is consistently inspired. “I am absolutely the result of the power and the prayers of my family to push me in an amazing divine direction. A balance act between the greatness I know I can be and the barriers society throws at us every day. You wake up as a Black man, ready to face whatever hurdle comes at you, overcome it, thrive, and move forward.”

When it comes to inspiration, Johnson believes in paying it forward. “You find how other people have been inspired, then you find your calling. It wasn’t that in the beginning — to be this space for Black men, inclusive of straight Black men, gay Black men, bi Black men, queer Black men, it became that.”

Representation in diversity is key for Bleu. “I’m not just about having Black faces in our work, but also hiring Black writers and Black photographers and Black editors and stylists, giving them opportunities, knowing that opportunities aren’t always there for Black creatives.”

When asked why representation is so important, Johnson responds, “Maybe because I didn’t have these images of myself growing up. Because of all the opportunities and support I had, I was self-aware very early, and my self-esteem for the most part was strong. It is important to me to pay it forward. To create spaces that do the same. There is that Black boy in Middle America or the South who wants to be a model, and he’s never seen Black models that look like him. He’s not the biggest toughest guy, he’s an everyday guy — I wanted him to be reflected in the magazine.”

“Or on the other side,” he adds. “There is the tough guy who may be good at football but may also be good at math, or really good at design, and he’s sketching after football practice. And he says, ‘I don’t ever think I can be a designer, I have to only be a football player.’ Well no, you can be a designer, because in Bleu, you saw a story of a Black male designer or creative director.”

His commitment to the Black narrative is clear: “We continue to do this work, because it’s going to take centuries to undo the mental oppression and psychological warfare placed on Black people in America. It’s not going to happen overnight. So, when I say I’m planning on a 100-to-200-year company, it’s not about me. It’s about the work and the work coming behind me for years to come.”

With that, Bleu has many years ahead and with vision must come planning. After more than a decade in business, Johnson understands what it takes to maintain and grow a media company. When asked what keeps Bleu going, he answers simply, “Magic tricks!” and laughs. “It’s hard to produce media right now, because there is so much noise. Not everything is real [in the industry], but we are trying to have a real company and be transparent. Thinking about long-term and legacy — I’m building a 100-year brand, not a just ‘right now’ brand.”