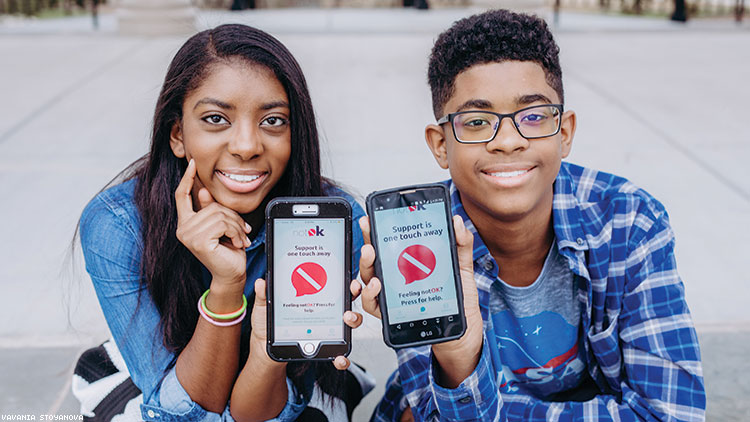 A new Black generation is becoming little Einsteins, thanks to digital tools.

According to the National Institute of Mental Health, nearly one out of every two teenagers (49.5 percent of those 13 to 18 years old) will experiences a mental disorder in their lifetime, and 22 percent of those with mental health issues will experience “severe impairment.” The National Alliance on Mental Illness reports that African-American and Latino folks use mental health services at about half the rate of white Americans.

When 13-year-old Charlie Lucas witnessed his older sister Hannah being relentlessly bullied and threatened at school — which sent her into a dark depression with suicidal thoughts — he knew he needed to take action. Finding no apps to help teens in times of distress, he and Hannah developed their own. Their app, notOK (notokapp.com), makes getting help easier, which is significant, because as its website notes, “Depression and anxiety inhibit a person’s ability to ask for help.” App users enter a list of “trusted contacts,” and when in distress, send a “notOK” alert, immediately notifying their chosen contacts with the message and their location via GPS. In just over eight weeks, their lifesaving app racked up nearly 30,000 downloads, attracted investors, and garnered a shout out from Grammy-winning artist Ne-Yo.

Meanwhile, D.J. Comeaux was amazed by the comic-based mega-blockbuster, Black Panther. The 12-year-old was most inspired not by the film’s namesake, but rather the hero’s younger sister Shuri. “Shuri was the star to me!” Comeaux exclaims. “The one in control, the one who made it possible for Black Panther to fight and win. Plus, she created those cool shoes and drives a super-fast, cool car. She’s definitely the star who made technology cool.” Indeed, in the film, Shuri develops Wakanda’s high-tech weaponry, vehicles, and armored suits. Wanting to inspire other Black youth to follow in Shuri’s footsteps, Comeaux created AfroBotBoyz (afrobotboyz.com) — a robotics-based initiative to encourage kids to engage with science, technology, engineering, and math (STEM). The organization’s awesome tagline is, “Yes, you can have an afro and build robots.”

According to a recent Pew Research Center study, Black men and women are underrepresented in the tech industry. But Comeaux intends to change all that. “I want AfroBotBoyz to be worldwide,” he says, adding he wants kids everywhere “to be OK with not being perfect, be OK being smart and into computers. Technology is important, plus it’s fun. I just want all kids to feel good about themselves even if they’re not the popular type. They’re still cool.”