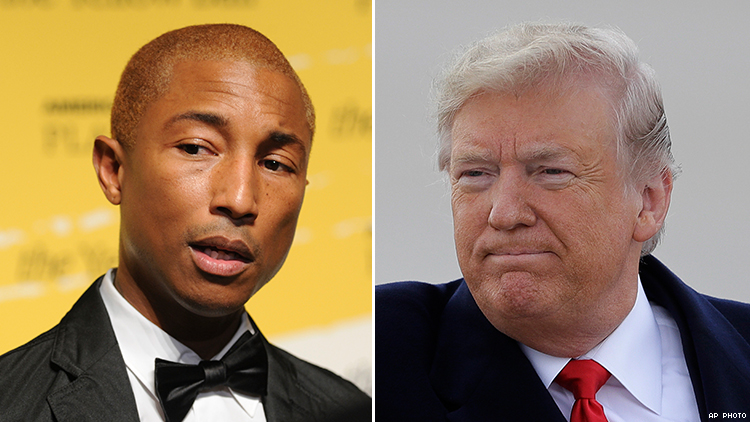 A cease and desist letter was issued to President Donald Trump after Trump used the song Happy at a Future Farmers of America convention in Indianapolis. The rally occurred hours after a gunman burst into Tree of Life synagogue in Pittsburgh and killed 11 in the deadliest attack on Jews in U.S. history according to The Washington Post.

The letter addressed to the president by attorney Howard E. King begins:

"Dear Mr. Trump: We write you on behalf of our client, Pharrell Williams, composer and performer of the hit song 'Happy.' On the day of the mass murder of 11 human beings at the hands of a deranged 'nationalist,' you played his song 'Happy' to a crowd at a political event in Indiana [sic]. There was nothing 'happy' about the tragedy inflicted upon our country on Saturday and no permission was granted for your use of this song for this purpose."

King's letter to Trump continues: "Pharrell has not, and will not, grant you permission to publicly perform or otherwise broadcast or disseminate any of his music."

The use of songs and licenses at political events descends into a gray area of law with no clear precedents and as NPR reports:

A 2016 BMI contract obtained by NPR that is specific to political campaigns makes the situation plain, and offers artists a back door. In its "Music License for Political Entities or Organizations," BMI inserted a notable provision: "... a specific work may be excluded from this license if notice is received from a BMI songwriter or publisher objecting to the use of their copyrighted work for the intended uses by [the political entity or organization licensing the music]."

Hopefully the president will just take the hint.