Pose's Indya Moore: Next Month We Can Fix Society 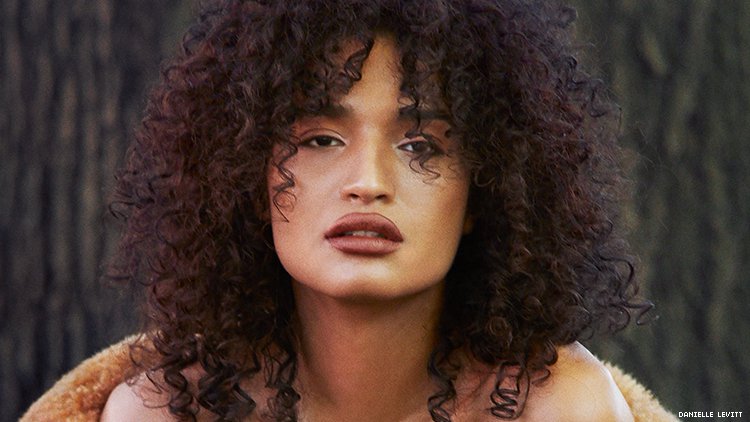 For too long, the most privileged decided the fate of the least. We can correct this by electing women and marginalized people, the actress says.

A week from the 2018 midterm election, it feels like the stakes have never been higher — particularly for LGBTQ citizens, as issues like "religious freedom" and gender identity become explosive talking points for candidates fighting for control of the House and Senate. With a recent poll suggesting that only 28 percent of young voters are certain they'll turn out to vote, it's easy to feel anxious about the results.

To counter that anxiety, we're highlighting people who are doing something about it: rising stars in the queer community who are using their influence and fan followings to raise awareness, get people involved, and get out the vote on November 6.

This week, Pose star Indya Moore talks about the Trump Administration's attacks against the trans community, what allies can do to help, and how our political system needs to change.

The Advocate: Currently, what political and social causes are your top priority?
Indya Moore: Every social effect at the mercy of an unfair system is my top priority. It's hard to choose specific groups to stand for when there is an entire system at work that is responsible for all the social issues we see.

As a black woman of trans experience, my position in this society leaves me really no choice but to stand for the intersectional identities I hold. But it's much bigger than me. I am striving for a sociopolitical-wide level of respect that transcends ego, selfish agenda, and narcissistic desire. From that foundation, I think it will be easier to access a result that can benefit every social cause. But in order to do that, we must all recognize ourselves and each other as truly equal, and deserving of a happy, safe and healthy life.

Laverne Cox, Isis King, Janet Mock, Our Lady J, Ryan Murphy, Steven Canals, the people I've met growing up and even me — all have inspired me to see that it is possible to get far anywhere, and that the capacity for positive and motivating influence is truly unlimited. They remind me to hold down a grounded sense of direction that isn't easily swayed, while also holding down values that are most important to me like visibility, love, freedom, voice, strength and agency.

With anti-trans bathroom bills and Trump trying to ban trans people from the military, the trans community is being used as a political scapegoat at a level we haven't seen before. How do we fight back?
I think we are all a victim to a psychological warfare that has never been about us. It's all about the election of Donald Trump and people like him. There is a lot of narcissism in this country, and a narcissist is motivated by power. If you tell a narcissist that someone is less than them in any way, they feel gratified, they feel very good about that.

This is what Donald Trump has done, from trans people to immigrants. He actively chooses the most vulnerable people in our societies to insult them, in order to garnish support from people who do not share their experiences. He is hiding behind religion, as have oppressive powers from the beginning of America. It's a narcissistic political cesspool of a game.

I find armor in careful thought, consideration and voice. Truth is light and your voice is the direction you point it in. Speaking up and letting people know you see their lies and the words they hide behind weakens them, because they are after all powered by deception.

Our government treats life as if it is disposable. It is not. We can only fight lies with truth and ignorance with information, and it is our responsibility as individuals to empower and strengthen the parts of ourselves that hold those values.

What should allies of the LGBTQ community do to provide support?
Definitely bring up the countless and consistent murders of black trans women. Black trans women and trans people in general are being misconceptualized as a problem in our society, and as a result we are being slaughtered left and right — by strangers, families, friends, police, and most sadly, ourselves. It's crazy, because the people harming us are making us out to be the kind of people they truly are to us. Our politicians have power and access to the consciousness of Americans, and it is being misused.

When we acknowledge the most silenced, ignored and disregarded [among us], it makes it very hard for anyone else to be treated as if they were disposable. You cannot see the entire [power] structure from the middle looking up. You have to position yourself at the very bottom to understand the entirety of the situation we are living with here.

Political allies need to push for ethical education. We literally need to teach classes on how to treat one another, so that people can stop dying by the hand of ignorance, both on behalf of others and themselves.

You endorsed Cynthia Nixon for New York governor and Alexandria Ocasio-Cortez for Congress. What lessons should other politicians learn from them?
Cynthia and Alexandria are sitting in their seats without a hidden agenda. It's obvious in their advocacy for the well-being of all humans, no matter what their existential experiences are. They aren't making excuses for why they can't be motivational, positive, impactful leaders. They are actively creating solutions for issues that are directly affecting people. They are the voice of the suffering voiceless and silenced. They aren't making equality and equity a monopoly — they are actually enforcing it.

Other candidates are winning because we are putting the lives of people who are suffering in the hands of people who are not, and as a result their social and lively progression becomes nothing short of a political opinion. This has been done for too long, so it's really important to listen to the perspectives of candidates who are teaching us about issues that exist beyond what our experiences may be, so that we can take ethical responsibility over the decisions we make on behalf of their lives and the future of our world.

Nowadays people don't really care about change, they just want to win. We see this dynamic everywhere, even in advocacy. But I think there is too much hope to give up. Look at the incredible politicians who bear true witness to the American reality — they are sprouting up left and right, in all directions. The issue is, our current party system is designed so much like a game, and it makes it hard for people to reach across to folk who truly, honestly and empathetically want better for all people and not just a few.

You've advocated for things like a living wage and universal healthcare, which some political commentators dismiss as "too far left" or out of reach. How do you respond?
I think the construction of terms like Left and Right polarize equality as a type of binary, not a common essential goal but just another opinion or "side." It keeps people from being able to grow, because we are being forced to choose a side — kind of like gender variant or trans people are forced to subscribe to a binary. Binaries definitely keep us from progressing. Imagine if we didn't have political parties and just had people who worked together to improve the life quality of everyone.

It's also just straight-up weird for people to not want other people to have better living wages and life qualities. I think that speaks to why so many people suffer — because people want them to, not because there is nothing to do about it.

Are there any specific political organizations you're getting involved with?
Not really, I'm not sure if I've come across the right ones. But I have worked with Global Action Project, a youth-run organization that provides a kind of microphone to voices of marginalized people who have been silenced.

I would love to work behind an agency that fully recognizes what I can assist with, and allows me to help them to reach spaces where the most impact can be made.

INDYA MOORE is an actress, model, director, and social activist, best known for her performance as Angel in the hit FX series Pose. She is also the founder of her own production company, Beetlefruit Media Inc. You can follow her on Twitter and Instagram.