This Photographer Wants to Change the Narrative on Black Men 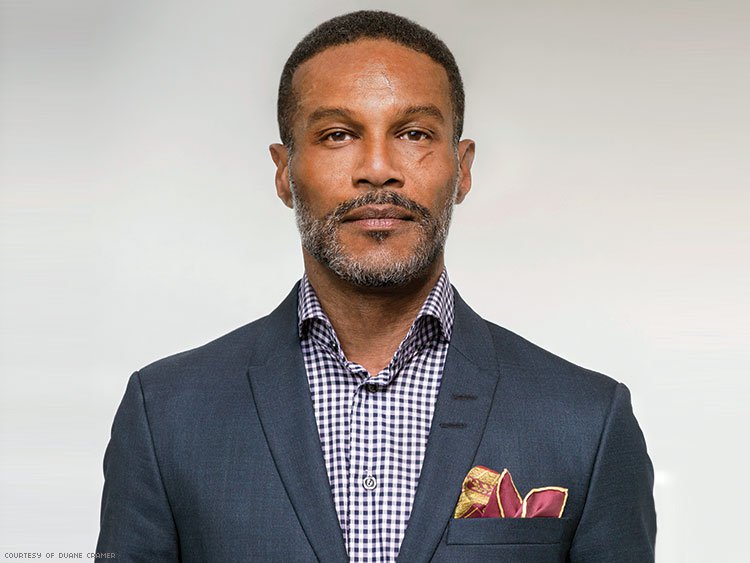 Duane Cramer's intention is to broaden and deepen the dimensions in which black men are seen.

Although he’s had a storied career as a photographer, Cramer — who eschews labels and boxes alike — has also been a model, poet, music video director, activist, spokesman (with Project Runway designer Mondo Guerra for Merck’s Project I-Design), VP of Better World Advertising, and a member of various boards of directors. The 55-year-old — who escorted Vice President Al Gore and his wife, Tipper, through the AIDS Memorial Quilt in Washington, D.C. in 1996 — recently reflected on his career and legacy.

How do you identify?Labels are unbecoming to me. I would say that I am a socially and artistically engaged human with divergent interests and talents. There’s a great diversity and depth in my work that spans all ethnicities, cultures, and sexual orientations. I’m not to be labeled any one thing.

Tell me about your work with black men. It is important for me to project positive images of black men, particularly in a world that is so often unkind to us. I am intentional in my quest: redeeming the black American male image. My intention is to broaden and deepen the dimensions in which we are seen, as black men, from the one-dimensional stereotype to the fullest spectrum of our humanity. My goal is always to capture and present images of black men that are authentic, culturally relevant, and that also evoke tremendous empowerment.

Why is photographing people living with HIV so important to you? My best friend [my father] died of complications related to [AIDS] over 30 years ago, and this forever changed the focus of my life. My camera lens [is] directed with laser focus on HIV awareness and eradicating stigma. It’s my calling. When my doctor told me that I was HIV-positive [in 1996] ... it altered the meaning of life for me. My work evolved as HIV became the lens through which I saw and experienced life. The body of work shifted.

What do you hope your legacy is?To have documented some important stories from a different perspective; to have been one of many warrior-activists and artists that helped to fight for equality and bring an end to HIV once and for all; to have been a person who spoke up and advocated for others. My hero, James Baldwin, said, “No label, no party, no skin color, and no religion is more important than the human being.” That says it all — and that is a good place to end.