Comedian Sampson McCormick Will Make History on Coming Out Day 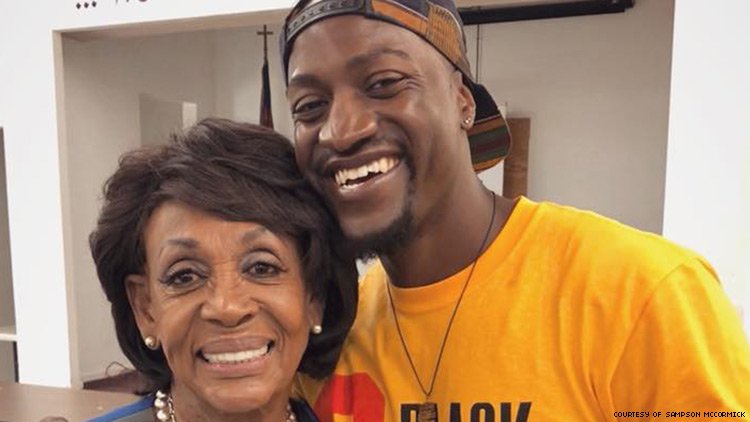 McCormick will break a glass ceiling, all while honoring iconic African-American artists and comedians.

Above: Congresswoman Maxine Waters and McCormick reclaim some time.

Sampson McCormick calls his coming out experience a mixed bag.

"I faced the worst rejection from my church at the time, and even parts of my own black community," the out comedian, writer, and actor says. "There was a generation of young black gay men standing up around the country, owning that experience and I was a part of that, as an activist and artist in the late 1990s.

"For a while, I couldn’t say 'I’m gay' to my family or be unabashed about it, yet I’d be on stages, sweating bullets talking to strangers about it, or in the city halls fighting for marriage equality and that gave me the strength to come out on a personal level. I learned to reconcile my identity as both black and gay, and be unapologetic about it. The experience will always leave me with warm memories. As hard as it was, I’m still a lot luckier than quite a few other gay men I know who got put out and beat up."

McCormick will headline a Coming Out Day event at the National Museum of African-American History in Washington D.C., on Thursday, October 11. The event will celebrate the contributions of black queer art of the Harlem Renaissance; McCormick will be the first LGBTQ comic to ever perform at a Smithsonian museum. McCormick believes the celebration speaks to "where we’ve moved as a society — but the fact that we still have a National Coming Out Day is a clear indication of how far we still have to go."

McCormick says he's proud of the contributions of black comedians and how they've used humor to respond to systemic injustice.

"Black humor has historically always been about laughing at the oppression of the past and present and presenting an optimism for the future," McCormick said. "Our humor has always been about taking tragedy and turning it into comedy gold. I look at earlier black comedians like Burt Williams, who had to perform in black face, and Moms Mabley, Pigmeat Markham, Dick Gregory and Redd Foxx who were on stage crushing it for years — without fanfare, and no one was letting them on television, they weren’t given opportunities to play mainstream stages because of segregation, but they kept kicking on the doors until they opened for black comedians."

McCormick will be joined by the black queer feminist and activist Charlene A. Carruthers, author of Unapologetic and 2Deep.

"It’s not just comedy — it’s love, and it’s healing," McCormick told MetroWeekly of his routine. "It’s church minus the bullshit. It’s what church should be."

Entertainment
There's a Reason We Want Michael Twitty to Cook Us Dinner
2:29 PM