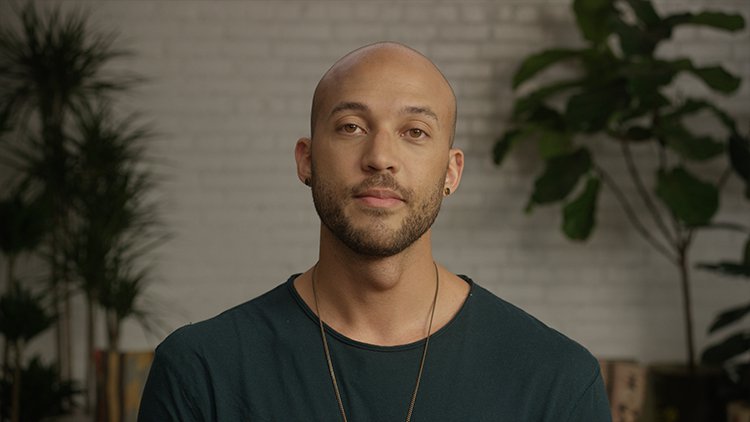 Young, urban, and sexy, yoga teacher Rocky Heron is all about helping you bring your mind and body into harmony.

Never underestimate the power of your body. Awareness and intelligence exists all the way down to the cellular level. Practices like movement, meditation, and positive thinking can send signals to the trillions of cells in your body and Rocky Heron wants to help you activate them.

The internationally-acclaimed educator has been teaching yoga for over a decade, but the discipline was the farthest thing from his mind when he first graduated from The American Academy of Dramatic Arts in Los Angeles with a degree in acting. He was in his early 20s and just looking for a job to pay the bills while he pursued his creative interests (he’s also a musician).

“I was quite miserable working the various paid jobs that I had,” he recalls, “working the front desk here, folding clothes—I tried and did it all. I thought it… might make for a less desperate way of life if the job that I had during the day, to sort of fund my creative pursuits, was something I also really enjoyed.”

Although he was a yoga practitioner, Heron had never imagined teaching the discipline, until, he says, “I was going down the list of different things I could do that would make use of my interests in philosophy and meditation and self-development.”

He realized then that his yoga teachers each addressed those topics, and they all seemed happy in their jobs.

“Maybe yoga would be a good opportunity to combine my various interests,” he recalls thinking. “I liked that it was physical, but also spiritual. I liked that it was challenging, and strength- and skill-based, but also had a potential calming and developing effect. I liked that I could kind of try my hat at being a bit of everything, a teacher, a fitness instructor, motivational speaker, facilitator. It was really just a great experiment to see if I would resonate with it.”

Cut to 11 years later, and it’s clear teaching yoga struck a chord with him, and has continued to resonate.

It’s apt to use musical metaphors to describe Heron’s attraction to yoga. The son of a reggae musician and an “alternative medicine woman,” Rocky returned to his Northern California roots and now lives in San Francisco with his partner Mica Walters—himself a performer, athlete, and fitness trainer.

In San Francisco, with what he calls his “magnificent tribe of artists,” Heron has developed his own unique sound.

“Much like pop music, Rocky is a musical and ethnic mutt,” his website says, in describing the R&B vocals and electro-Caribbean-dance beats of his latest EP, “Nuffa Luv.”

Heron sees his musical harmonizing—which has in the past, included monk-like chanting and Hindu mantras—as resonating so well with his yoga practice that his workshops and events often feature his own live performances.

Now an expert in the physical and mental elements of the yoga practice, he’s eager to share the knowledge.

“One might say the goal of yoga, at least the physical practice, is to become more aware and more sensitive and more defined at the level of ourselves,” Heron says, explaining the mind-body connection. “It’s not that we’re living outside of this machine [our body] that’s either working for us or against us, we’re really living inside of it.”

With yoga, he says, “we’re fusing our awareness into our own body so we become more ourselves.”

People living with manageable conditions like HIV often feel at odds with their own bodies. Heron says that’s why they can end up focusing solely on their physical health, at the expense of their emotional and mental wellbeing.

Heron adds that connecting with your body can be as simple as moving your joints when you first wake up in the morning, explaining doing so can “have a tremendous impact on how you feel emotionally.”

Just as our physical wellbeing can impact our mental health, Heron says, depression and anxiety can show up in your body, too. You might not even realize it, but your body may be retaining muscle memory of an emotional event.

“Our whole life is accompanied by movement,” he explains. “When things happen to us, the emotions we feel, or the trauma and anxiety we feel, produces chemical movements that result in feelings or thoughts. Over time, those feelings and thoughts coupled with how we move through the world can create an emotional memory in our tissue, our connective tissue, our muscular tissue, and in our feeling body.”

There can be cathartic moments of release that happen when you move through an area of your body that hasn’t been activated for a while.

“It’s like lighting up an area of your body that has been closed for business,” he says. Moments like these can be emotional, often times joyful.

“What I find is that for a lot of people [dealing] with anxiety or depression, they’re sort of consumed by the habit of their thoughts,” he adds. “There are certain thoughts or certain frequencies they get stuck on, and that becomes a perpetual piece.”

That’s where yoga can help to interrupt that repetition, Heron explains. If the teacher is telling you to put your hand here, move your leg there, and inhale.

“A lot of the functions of the body that otherwise would be autonomic become conscious," he says. "To be fully absorbed in the presence of what you’re doing in the moment also means you don't have the capacity to be thinking those thoughts that were causing the anxiety that you were feeling before.”

Yoga has been shown to have a long list of benefits to one’s physical health, including improving flexibility, building muscle strength, promoting bone health, and increasing blood flow. But, Heron says, even if yoga had no physical benefits, it would be worth the time.

“If for no other reason, the yoga practice can be a welcome distraction from the perpetual station that your mind might be tuned to. If you disrupt the pattern enough, when you finish the class you have a more open platform from which to choose your next thought.”