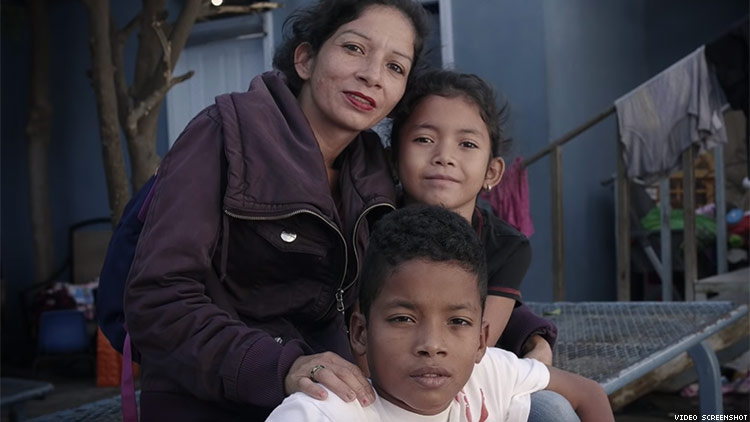 Spike Lee, the mastermind behind this year’s award contender BlacKkKlansman, has now turned his lens to the border wall in a new short film for The Killers song, “Land of the Free.”

Powerful vérité footage shows the faces and families at the border awaiting entry to a better life as lead singer Brandon Flowers sings about “people who just want the same thing we do.” As the film cycles between grainy, 8mm close-ups and ultra-HD drone shots, the lyrics and visuals contrast the hope of America with a brutal reality.

The Oscar-nominated director captured footage on a trip to the U.S.-Mexico border at the end of 2018. He shows bittersweet smiles on children's faces and does not shy away from the violence they face. A rainbow kite flying above the wall reminds us that LGBTQ asylum-seekers face the most violence at the border. A recent Trump administration directive forces migrants to wait in Mexico, where they become sitting targets for attacks and are forced to live in daily fear of death — and LGBTQ migrants are especially at risk. The final sequence depicts children seated in front of riot squads, before U.S. border patrol agents start firing tear gas at the smiling families we saw before.

Flowers goes beyond the border, touching on racial injustice in his lyrics.

When I go out in my car, I don't think twice
But if you're the wrong color skin
You grow up looking over both your shoulders
In the land of the free

And he blatantly calls out our gun violence epidemic.

So how many daughters, tell me how many sons
Do we have to have to put in the ground
Before we just break down and face it
We got a problem with guns

The short film drops during the fourth week of the government shutdown — the longest ever. Lee acknowledged the 800,000 federal workers in his Instagram post about the video.

I Thank Brandon Flowers Of The Great Band THE KILLERS,Who Called Me Up To Direct A Short Film For Their PROTEST Song-LAND OF THE FREE. This Could Not Have Dropped At A Better Time As The United States Of America Goes Into It's Record Breaking 4th Week Of A Government Shut Down. Prayers And Blessing To The Over 800,000 Americans Who Are Working For Free. Click The Link In The Bio.

The Killers also tweeted a heartfelt backstory of the tragedies that inspired the song.