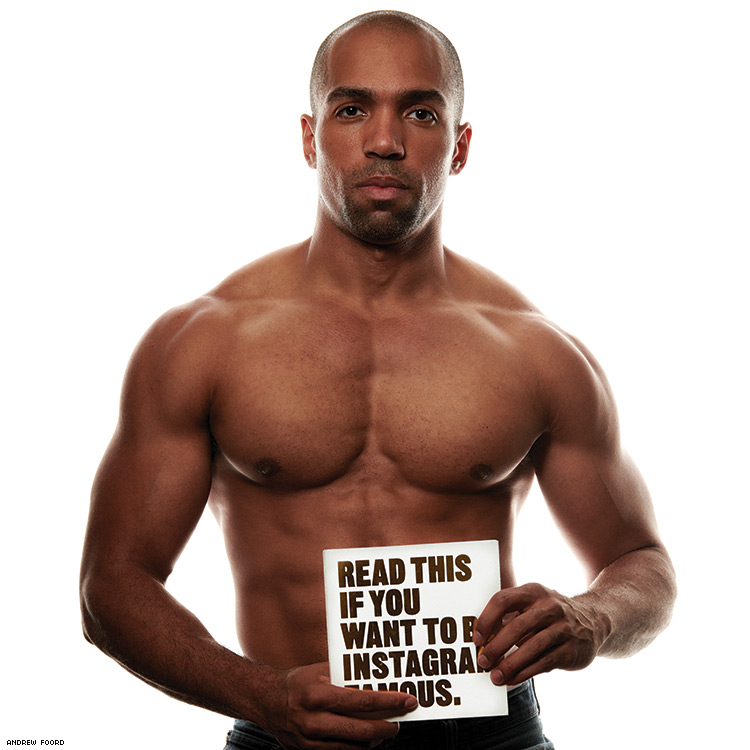 Multi-hyphenated artist Adam Davenport is bringing Black visibility into some of the most whitewashed worlds, including opera and EDM.

New York City-based electronic dance artist, playwright, actor, and author Adam Davenport is climbing his way to the top of multiple worlds, including some where people of color are notably absent.

With humble beginnings in Harvey, Ill. (one of the poorest suburbs in America), the artist set his dreams high and has already achieved many of them. He graduated from Yale University and, at 27, became the youngest member in the playwright/directors unit of New York City’s famed Actors Studio. After pursuing screenwriting and directing in Los Angeles, he decided he wanted a change of pace, so he moved to New York and made his stage debut in the opera adaptation of Tom Wolfe’s The Bonfire of the Vanities. From there, he went on to perform in numerous other opera and theater productions.

Davenport continues to make history. In 2017, according to music writer Judith Davis, he became the first Black producer to chart eponymously on the Billboard 200 for Electronic Dance Music (EDM). His debut single “My Return Address Is You” (featuring Beyoncé kin Shanica Knowles) spent 10 weeks on the Billboard Dance Club charts.

Now, the introspective and thought-provoking artist discusses his life and the future of Black power in music, film, and EDM.

Was there a moment that inspired your journey toward performing?

Dance music has been part of the soundtrack to my own self-acceptance. Janet Jackson’s albums Rhythm Nation and The Velvet Rope were monumental in my journey as a young gay Black man growing up in the south suburbs of Chicago in the ’90s. As she sang about homophobia, bigotry, racism, AIDS, and self-love on pop-dance tracks, I was blown away to learn that the genre could be used to say something powerful. Jackson was a voice for someone like me who felt disenfranchised and marginalized in an era where it was not as easy to be so courageous and transparent about who you are. I was a lonely kid who survived bullying and conversion therapy, so her music not only inspired me, but connected with me on a gut level. So while my peers played outside on the weekends, I often played the piano and sat in my room writing song lyrics, imagining one day becoming a recording artist in my own right.

When did your acting journey take flight?

My first audition was in New York City at the age of 31. For the previous decade I had been pursuing a career as a writer-slash-director. After working as a screenwriter in my 20s and developing material for numerous production companies, my soul needed a change of scene from the Hollywood maze, so I packed everything into two suitcases and moved to N.Y.C.

It was on the stage where I discovered that I am perhaps drawn to quirky, off beat, and eccentric characters. Acting has allowed me to become comfortable with my own personal weirdness and it’s come through some of the more interesting work I’ve done to date. When I walk into those audition rooms, I might be perceived as one way because I am fit and have consistently invested my time in the gym over the last five years, but I’m much more interested in being a character actor than a leading man type.

What inspired you to pursue a career in EDM?

I ultimately want to use electronic dance music as a narrative tool. Just as Lin-Manuel Miranda used hip-hop beautifully to advance storytelling on the stage, I have my own story called Weekend Warriors that I’d like to tell on the stage with electronic dance music. I’m willing to do everything myself—write the book, produce the music, DJ the live set, act in it—and so right now I’m at the stage of developing my voice in the genre. I’ll release a concept album or EP of Weekend Warriors before I mount a full production.

Being the first African-American EDM producer to chart on Billboard is a big deal.

It’s interesting that EDM has been dominated by largely straight white DJs [and] producers from Europe, and yet the godfather of house music — to which electronic dance music is indebted — happens to be a gay Black man, also from Chicago, named Frankie Knuckles. Frankie passed away in 2014, but I’d like to think that his spirit is blessing my efforts.

Any successful project is the product of successful collaboration, and I had fantastic collaborators on my first single. I cowrote “My Return Address Is You” with Leslie Mills, an Emmy-nominated singer-songwriter from Nashville. I wanted the vocal arrangement to have a bit of nostalgia, a sort of throwback to the tight harmonies of a Fleetwood Mac song or ’80s ballad. I needed an amazing vocalist who could deliver that and I got that in spades in Shanica Knowles. Her voice is intimate and raw. Her phrasing reminds me of Alanis Morissette or Florence Welch in its ability to communicate feeling directly to the listener. She [Knowles] nailed all of the vocal harmonies — and there are a ton of vocals — in one two-hour studio session.

Tell us about the writing process of that single.

I wrote the lyrics on the subway in 15 minutes. I was inspired by the feelings I had after a romance from my first summer in N.Y.C. ended. Our time together was short but I had love for him right away, and he’s had a long-term impact on me as he gave permission to my dreams. When I told him I wanted to start making dance music and acting, he said that he saw that happening for me. He is also an artist and professional in the industry who’s made his own mark, so I believed his belief in me, if that makes sense. As the track went into production and then took on a life of its own, it felt like it had cosmically become a document of the love we shared — as brief as it was.

What do you hope for the future of your industry and EDM as a whole?

I’d like to see EDM become a more diverse space. One thing I love about the genre is that many have called EDM the “music of the millennial generation” in the same way that alternative music was in the ’90s or rock was for my parents growing up in the ’60s. And so if electronic dance music is truly the music of our generation, I’d like to see that reflected in the diversity of its artists. EDM has become such a huge business and it would be fantastic if that commercial success could be shared by artists who aren’t solely straight white men, frankly.

I’d like to see a Black Calvin Harris, a Latinx David Guetta, a transgender Ellie Goulding. The labels need to develop and give opportunities to artists in this space who don’t all look and sound the same. And I say that with no disrespect to the artists who are at the forefront of the genre now, as so many of them are phenomenal musicians. But let’s get some color into the roster so it’s looking less homogenous. For instance, I’d like to see more attention given to Black Coffee — South Africa’s biggest DJ. His collaboration with Guetta on “Drive” is a step in the right direction.

What other projects do you have going on?

I turned in a proposal for my graphic novel Tar Baby, which blends sci-fi [and] horror, film noir, and African-American folklore against the backdrop of the heroin epidemic in West Virginia. I originally wrote it as a screenplay with playwright John Budge with the intention of directing it as my first feature and the first installment in a three-part franchise, and I’m introducing the [project] as a graphic novel. Marvel illustrator James Rodriguez did the artwork. For the film, I’ve cast a transgender actress as my lead, Mya Taylor, who won the Independent Spirit Award for Best Supporting Female in Tangerine and made history as the first transgender actor to win [at the annual award show].

I’m also working with a start-up on a new music app called Shoudout. My new single “Change the World” is a cover of the Eric Clapton song from the ’90s. It’s the first track where I use my own vocals. I’m also finishing up an original track that was written for me by producer Sean Greiner and songwriter Gail Grossman.

Where do you see yourself in the future?

For the time being, I try to focus on living in the present moment and maximizing ways for my creative efforts to also satisfy my immediate needs like taking care of myself as an adult in N.Y.C. But I do hope that in five years I am happy, able to continue supporting myself as a full-time creative, and can share that life abundantly with another person. I do believe I have met that individual. We are living together now and so I hope we are five years deeper into that love that we already share.

What do you wish to inspire in others?

Each success of mine largely came out of getting obscenely focused and setting out to accomplish something that others said I couldn’t do or didn’t support me in doing. I’ve met a bit of negativity and naysaying from people who were once close to me when I told them I was going to start acting after age 30: “You’re starting too old, it’ll never happen.” That kind of feedback comes from that person’s own insecurities, self-doubt, and failures. They’re not living your life. It’s never too late to start living your life.