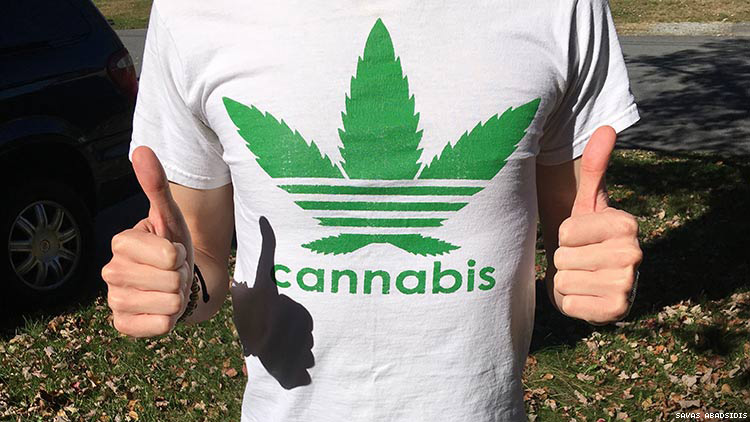 As marijuana becomes legal in more and more states,  it's saving more lives.

Not gonna lie. At one point, I did use it as a crutch.

Being called a "puff," "fag," or "pansie" as as often as I was from a young age certainly had an impact on my self-esteem as a kid. I remember that blissful indifference that I experienced when first I inhaled. And it became a regular habit that I enjoyed — maybe too much.

Marijuana in some form or another has been a part of this country’s history since its founding. Hemp used to be one of the most lucrative cash crops in the United States’ original  settlements and colonies. Just as it has also been a big part of my history and coming of age — and my understanding of self. Marijuana is the most used illegal drug in our country.

By the time I became aware of my sexual identity I had already been made fun of for it. I guess others know things about you before you admit them to yourself. The last years of high school were a hard place for me, and I would be lying if I said that marijuana did not bring me solace during that time.

It wasn’t the type of bliss that alcohol engenders — the total removal from the present by the shutting down of your senses. No, it was more like an awakening to my inner self. I no longer ran from my problems, I faced them. I actually started changing things and discovered the courage to so. It unlocked an inner consciousness that helped drive me forward for years to come. Just as many aspects of life come and go, so did my use of the marijuana.

As I grew to have less free time and more responsibility, my use had waned to, maybe, a weekend vice. Eventually I had decided, like many other things in my life, it had served its purpose and was better off left in the past. That was until about two years ago now, when I had my oral surgery for wisdom teeth extraction. The day of the surgery I remember thinking to myself “this is the end to your suffering, after this you will heal and you can have your life back.”

Little did I know this would be the end of one pain and the beginning of another I still find hard to put into words. It would also be the turning point from viewing marijuana as just an old friend, to a possibly viable form of medication. While still classified as a schedule 1 drug under U.S. federal law, medical marijuana has been available in New York since July of 2014 when Governor Andrew Cuomo and the New York State legislature passed the Compassionate Care Act. After it was enacted, the Department of Health (DOH) worked on the implementation of the Medical Marijuana Program which launched on January 7, 2016. The Department of Health regulates the program and the registered organizations that are authorized to manufacture and dispense medical marijuana in New York State.

Now the first dispensaries are opening across the Hudson Valley and in Dutchess County. In August, the state Health Department authorized five new companies to manufacture and dispense medical marijuana in New York, including two stores in the county and one manufacturer in Ulster County. Citiva Medical will manufacture in Orange County and have a dispensing facility in Wappingers Falls, where I live.

Rejecting widespread criticism from some sectors, the state “is committed to growing the state’s Medical Marijuana Program responsibly,” Howard Zucker, the state's health commissioner, said in a statement. “The addition of these registered organizations will make it easier for patients across the state to obtain medical marijuana, improve the affordability of medical marijuana products through the introduction of new competition, and increase the variety of medical marijuana products available to patients.” Under New York's program, only non-smokable forms of the drug are permitted. Originally heavily restricted, medical marijuana was only accessible to patients suffering from terminal illnesses, HIV, and other life-long debilitating diseases or afflictions. However, the two-year report on the medical use of marijuana under the Compassionate Care Act the Department of Health (DOH) found that patients certified for any of the qualifying conditions plus chronic pain was over 50 percent.

Recognizing more patients suffering from chronic pain alone could be served and treated by amending the regulations, the DOH announced on December 1, 2016, that chronic pain would be added as a qualifying condition for the Medical Marijuana Program. Many of us suffer from some amount of physical pain in our lives.

Some of us, myself included, suffer from what’s known as chronic pain syndrome. For most patients it starts with an injury or because of an underlying health condition. Some of the leading causes for Chronic Pain syndrome can include: past injuries, surgeries, consistent migraines, nerve damage, and fibromyalgia. Chronic pain can be a debilitating symptom to both your physical and mental health. Non-invasive treatment for the syndrome is limited in its variety: pain medications, mind-body techniques, some physical therapies, and acupuncture. As health premiums soar, and insurance companies offer little to no coverage for holistic types of treatment, we have seen a drastic rise in opioid based pain medications — which has in turn had a direct impact on the rise in use of illegal drugs such as heroin and fentanyl. The addition of chronic pain as a qualifying condition to the program could be a “saving grace.”

Since its addition the DOH, prescriptions of medical marijuana have more than doubled, adding an additional 18,291 patients (a 122 percent increase). The DOH is closely reviewing its dispensing data as some federally-sponsored studies suggest that there is a correlation between states with medical marijuana programs and lower levels of opioid overdose deaths. Because marijuana is still considered a schedule 1 drug, it is typically not covered by most health insurance policies. Out of pocket certification can cost anywhere between $250-400, depending on how it is obtained. Usually a prescription from a certified doctor is needed, however recent amendments have allowed nurse practitioners and physicians assistants to certify patients for treatment.

Once certified for qualifying conditions, another registration fee of $50 via the DOH website is required to obtain a medical marijuana identification card. This card and the doctor's certification will allow you access to any of the Department of Health regulated dispensaries in the state, and consultations with Medical Marijuana Program pharmacists. Treatment prices typically vary by dispensary and form of treatment.

The options of treatment associated with medical marijuana in New York consist of two main forms: THC and CDB based products. The first, THC, is associated with the euphoric or “high” feeling that marijuana can give you. This option is typically geared towards those suffering from terminal illness or untreatable diseases/afflictions, such as HIV/AIDS, cancer, ALS, cpinal cord damage, etc. The second treatment is based off of CDB, which has calming effects on the nervous system. CDB is typically geared towards patients suffering from nervous system conditions such as chronic pain, epilepsy, Parkinson’s disease, or Huntington’s disease, etc. Either THC or CDB courses of treatment vary in form from capsules for oral use, tinctures (oils) for sub-lingual (under the tongue) use, oral sprays, and vaporizers for inhaled use.

The Department of Health itself does not advise patients or their practitioners regarding the most viable treatment option for a patient’s condition and solely relies on the determination of certified health professionals. Some see it as a “threat,” others view it as a “saving grace” (these are terms used by both a doctor and a nurse practitioner who asked to remain anonymous). The more we know about medical marijuana and its many uses, the more empowered we are to live and lead healthier lives.

To find a dispensary in NY State go to Weed Maps.