Too Stressed To Celebrate? Try These Coping Tips 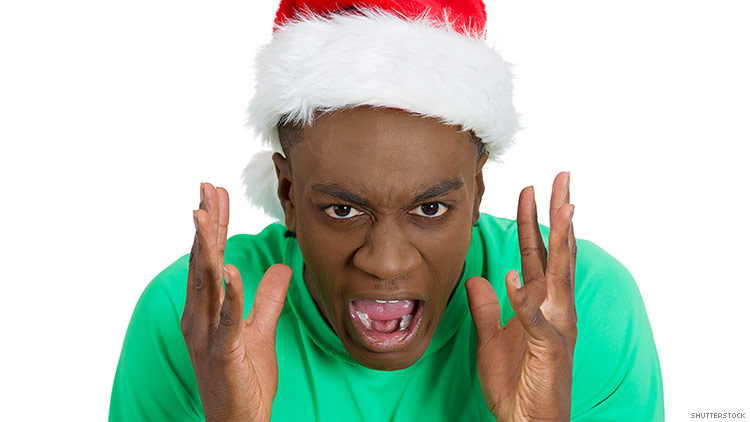 Stress is a normal part of life. But severe stress can be particularly challenging during the holiday season.

Stress is a normal part of life. And there’s even such thing as a “good” level of stress that keeps us going, according to psychology researchers Sanda and Florin Dolcos at the University of Illinois in Urbana-Champaign.

But severe stress can interfere with day-to-day living, and this can be particularly challenging during the holiday season, they say.

The married couple studies how memories from past experiences can affect someone’s well-being. They also explore tools and strategies for coping with painful memories or overwhelming stress.

Side Effects Public Media asked the Dolcoses about their research—and about some of those tools for coping with stress:

In your research, you’re trying to understand how a person’s unpleasant memories from their past can affect their well-being today. Is this particularly difficult for people who suffer from anxiety, depression and other mental illnesses?

Sanda Dolcos: Reflecting on past negative experiences is natural: it can help us achieve new insights that may help us deal better with the memories of those experiences and move on.

However, in the case of people who suffer from affective disturbances--such as anxiety, depression, or PTSD—memories of such unpleasant events can become intrusive. They tend to focus excessively and ruminate, or dwell repetitively on these experiences, usually related to loss, failure, rejection, or embarrassment.

These repetitive automatic retrievals worsen the negative emotional state in which a person is and, rather than leading to new insights, they amplify the affective response to distressing situations and increase access to other negative memories. Also, if such experiences persist over time they also lead to changes in our brains.

What are some examples of how this can play out?

SD: Let’s say that someone felt very embarrassed because of inappropriate comments made by someone at a previous holiday dinner party. Thinking about the prospect of joining the same people for an upcoming party might lead to the re-experience of the initial negative emotion, dwelling on the thought of maybe being embarrassed again.

If the negative emotion is very strong and the memory becomes intrusive, the person would dedicate all the resources to dealing with these emotional responses, at the expense of properly attending to other relevant tasks. The negative emotional states created by these ruminative acts would increase access to other negative memories, lead to new worries about the upcoming holiday events, creating a vicious circle that would impair their daily functioning.

Or in the case of veterans or shooting survivors, especially those with PTSD, everyday noises that are similar to the noises heard during the shooting or in combat (such as a car backfiring loudly, or during the holidays, balloons popping or fireworks) may bring back strong negative memories.

These may become a source of challenge and distress in these populations, with the potential to cause physical and mental distress. Such noises may trigger flashbacks, putting people in a ‘danger mode,’ in which they become frightened and display physiological reactions of fear, despite knowing that they are safe.

Why is it so hard to not be distracted by unpleasant memories?

Florin Dolcos: We tend to dwell on situations or events that cause strong emotional responses. The stronger the emotions, the higher the chance that the memory associated with the event will be retrieved more often, more intensely, and more vividly.

These emotions become the focus of our attention, and trying to deal with them repeatedly drains our cognitive resources, making it harder to exercise cognitive control and focus on other activities.

Do certain personality traits protect a person against emotional distress?

SD: Yes, personality traits associated with positive affect play a protective role against emotional distress. We have shown that optimism--a deep-rooted mindset defined as the dispositional tendency for people to hold generalized favorable expectancies about their future—plays a protective role against symptoms of anxiety. Optimism is also associated with increased coping behavior, is beneficial in times of adversity, and promotes psychological well-being.

Another personality trait, extraversion, which is characterized by sociability and a tendency to experience more positive affect, also plays a protective role against emotional distress. It has beneficial effects on memory, being associated with enhanced memory encoding and greater recall of positive memories, and with maintaining a positive state following retrieval of positive personal memories, with indices of working memory performance and efficiency.

Habitual engagement of an effective emotion regulation strategy, called reappraisal, has also been linked to positive effects in many domains. Reappraisal involves reassessing the meaning of situations or thinking more positively. Individual differences in reappraisal ability (trait reappraisal) play a buffering role in the link between stress and negative outcomes, such as anxiety and depression.

Is it true that it can be even harder to cope with this sort of thing during the holiday season?

Holiday events such as a dinner or party, decorating, gift shopping, or special holiday foods may act as external cues and trigger memories of people who are no longer with us. These are unique cues, which maybe are triggered only around the holiday times. While such memories usually make us sad, they can also help us keep alive the memory of the people we lost and the traditions of our childhoods.

If, however, similar holiday events had been associated with negative experiences (family tensions over politics, difficult family conversations, embarrassing interactions, excessive expectations from others, etc.), holiday cues may also bring back unpleasant events experienced in the past, eliciting sadness, anger, or other negative emotions.

Finally, for some, the holiday season can evoke stress, self-reflection/evaluation, feelings of loneliness and anxiety, which is known as the “holiday blues.” Loneliness makes people feel more unsafe and threatened in social contexts, and is associated with increased risk of depression and other negative outcomes.

What are some strategies people can use to prevent unpleasant memories from derailing them?

SD and FD: One strategy is to avoid exposure to the contextual cues that may trigger a strong negative response. By identifying and removing such cues, people can avoid re-experiencing memories of those negative events, and the negative emotions associated with them.

If this is not possible, and the unpleasant memories are triggered and become intrusive, switching the focus of attention from the emotional aspects of that memory to non-emotional, contextual aspects could help reduce the intensity of the negative re-experienced emotions.

For instance, anything else from the same event could be the focus of our attention, to get away from focusing on the negative emotions (when and where the event happened, who else was there, how we were dressed, and even how the weather was like, etc.).

In our research, we showed how such strategy is effective in coping with distressing memories, which is better than trying to suppress and not deal with those memories altogether.

Another useful strategy that people can use is to distract themselves, by staying busy and avoiding free, unstructured time. They may get involved in activities they enjoy, like volunteering, exercising, etc., which would create positive emotions that would likely short-circuit the negative thinking loop. This would also free up cognitive resources that allow a more positive perspective on the current and previous experiences.

Spending quality time with family and friends can also be very helpful. Social relationships can provide enjoyment and can feel rewarding. Moreover, they also have a protective role, being associated with mental/subjective well-being across the lifespan.

Social support gives people access to the benefits of shared resources, and has been tied to lower psychological and biological responses to stress. When people believe that the demands of a stressful situation exceed their personal capabilities and resources, they tend to appraise the situation as a threat and as out of their control, which leads to negative emotions and maladaptive behavioral responses. But the perception that they have the support of others may increase their perceived ability to deal with the situation, influencing the way they appraise upcoming events.

A Roman philosopher, Marcus Aurelius, once said that “If you are pained by anything external, the pain is not due to the thing itself, but to your estimate of it; and this you have the power to revoke at any moment.”

Indeed, this is easier said than done. But it is important to acquire and develop a ‘toolbox’ containing different emotion regulation strategies, such as focused attention or distraction and reappraisal.

Learning how and when to use these strategies has the potential to help us avoid the experience of impairing negative emotions leading to intrusive memories and distress.

This story was produced by Side Effects Public Media, a reporting collaborative focused on public health.