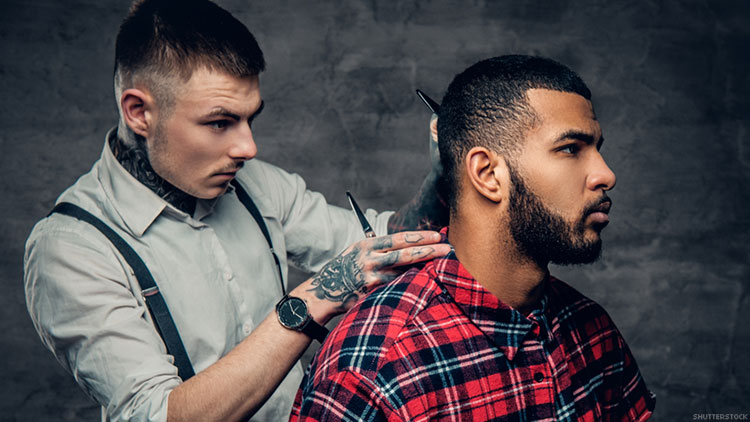 Getting some trim is not only good for your selfie game, but also your heart health.

As it turns out, barbers do much more than give a nice chop and fade. The experience of going to the barbershop not only brings communities together, but it also has incredible health benefits, according to a recent study published in the New England Journal of Medicine.

After researchers recruited barbers and pharmacists to perform what they dub “interventional therapy” for Black men, they discovered a huge majority saw a drop in their blood pressure — simply by going to the barbershop. This is pretty sweet news, especially since statistics show that Black folks develop high blood pressure more often (and at an earlier age) than others.

The Centers for Disease Control and Prevention shows that 43 percent of Black men deal with high blood pressure — second only to Black women, at 45.7 percent. Collectively, blood pressure causes nearly 1,000 American deaths every single day. So I’d say it is time to start paying attention.

In the study, 319 Black men living in the Los Angeles area were divided into two groups. All of them were between the ages of 35 and 79, and had a systolic blood pressure reading of over 140 mmHg (recent guidelines say that below 130, technically 130/80, is considered normal).

The first group received interventional therapy by both their barber and a pharmacist, who made monthly visits to the shop. The pharmacist also provided information on heart health during these visits. The second group, however, only received standard therapy from their barber without the presence of a pharmacist.

The results? Nearly two-thirds of guys in the first group saw their blood pressure drop to a healthy number after six months, while fewer (11.7 percent) in the second group saw a similar decrease during the same time period.

“When we provide convenient and rigorous medical care to African-American men by coming to them — in this case having pharmacists deliver that care in barbershops—blood pressure can be controlled and lives can be saved,” the study’s lead author Ronald G. Victor pointed out to Science Daily.

Eric Muhammad, the owner of A New You Barbershop, located in Inglewood, Calif., added, "It's the silent killer, and it has cost the lives and health of a lot of good men. It's a no-brainer that Black men are at the highest risk of high blood pressure. What's different about this study is it looks at ways to effectively bring it down with the help of your friends, family, and support group."

One of the pharmacists who treated the participants in the barbershops, C. Adair Blyler, told reporters, "There is a different level of trust and respect that's earned when you meet people where they are, instead of in a hospital or clinic," he said. "The rapport I've been able to establish with this group of patients has been unlike any other I've had in my professional career."

Researchers pointed out that consistent trust and rapport is essential in treating hypertension because “it’s a chronic condition that requires ongoing care and lifestyle changes.”

Thankfully, the study’s authors have begun a second phase to figure out if these kinds of benefits last long-term, or could be sustained for an additional six months after the therapy. They also hope to expand the study to reach additional parts of the country.

That being said, who wants a cut?