Get Jacked In A New Way 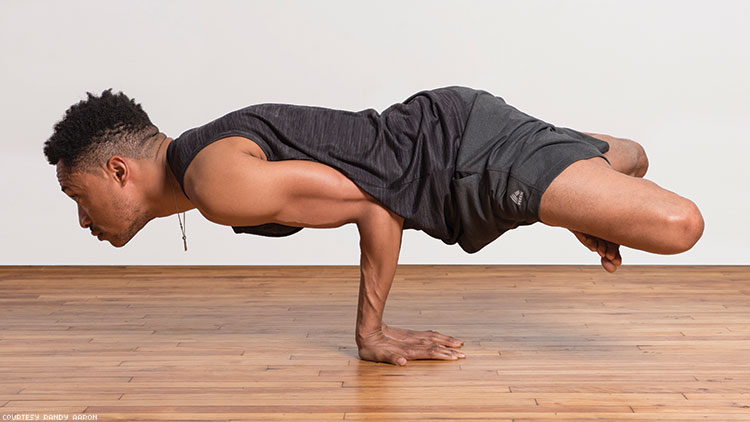 Yoga is not just for white chicks. Pull out the yoga mats!

It’s a dog-eat-dog world out there, and the pressure is real for guys to get jacked. That may mean buying protein powder in bulk, adding an extra hour (and more weight) to your gym training, or being sure to count those calories. But there may be a better way to strong muscles — one that comes with a strong mind, too.

According to a 2015 report presented at the Anxiety and Depression Association of America conference, yoga lowers levels of cortisol, the stress hormone that gives you the blues and lowers your stamina at the gym. (Who doesn’t want to fight that?) A Brazilian study published in Complementary Therapies in Clinical Practice also showed that yoga increases self-control, self-perception, well-being, and body awareness — uniting mind, body, and spirit in health.

Broadway star and yoga educator Randy Aaron (pictured) knows the benefits of yoga firsthand. But it took a while for yoga to find him because it wasn’t pervasive in the South. The New Orleans-native took his first class in 1998 when he was attending New York University and studying acting.

“My acting teacher used it as a way to warm up the body and to find the connection between the body, mind, and breath,” he remembers. “I fell in love with it instantly and I have been hooked ever since.”

The hustle is real for those of us living in urban environments, whether it’s New York, Chicago, or Atlanta. For Aaron, who teaches hot yoga during the day at Modo Yoga NYC (nyc.ModoYoga.com) — and hits the stage performing in The Book of Mormon on Broadway at night — yoga is key not only for stamina, but also an enriched perspective of the world.

“Yoga has the power to decrease stress and chronic pain,” he says. “[But] it also helps you to not take yourself so seriously, thus allowing you to forgive more and love harder.” He adds that most people “find a deeper connection to the world around them and a deeper more loving connection to self.”

And no, it’s not just for white suburban housewives.

“Yoga is for everyone,” he stresses. “There are even classes geared specifically towards men and issues that we struggle with as far as tight muscles from working out and chronic diseases.”

“I offer free classes to most people I meet as an incentive to introduce them to the practice,” he says. “[What] I come up against mostly is the idea that you have to be flexible in order to do yoga or that yoga is too static. People want to move their bodies. Yoga is for everyone, especially those who are non-flexible. You practice yoga in order to increase your flexibility. There are also different kinds of yoga offering varying speeds and intensities. For those wanting to move at a slower pace I would recommend a Hatha or Yin practice. If you’re looking to pick up the pace I would suggest a Vinyasa practice.”

The great thing about doing yoga is that you don’t need a fancy studio. You can find a workout on YouTube and there are even apps catering specifically to different styles. If you want to practice, it’s only a click away. “Yoga has made me a more mindful person,” Aaron says. Currently he’s in the process of opening up his own yoga studio: Modo Yoga Downtown Brooklyn.

Yoga, Aaron says, “has shown me how to love myself more than I ever thought possible. It has given me the strength to release those things that no longer serve me and to reinvest in those that lift me higher. Yoga has not just freed my body from injury, but [has] freed my mind from limitations. I am limitless."