“To Be Young, Gifted, and Black” Panther at the SAG Awards 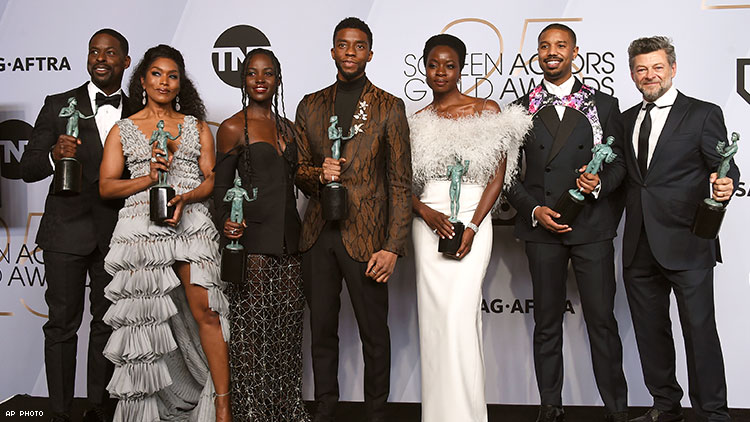 The blockbuster film has another groundbreaking night at this year’s awards.

Disney/Marvel’s Black Panther won the SAG Award for Outstanding Performance by a Cast in a Motion Picture Sunday at the 25th annual SAG Awards, making it a serious contender for next month’s Academy Awards.

Chadwick Boseman delivered an inspiring speech as his fellow cast members surrounded him on stage. “I think of two questions we have received: 1.) Did we know that this movie was going to receive this kind of response? 2.) Has it changed the industry?”

He continued, “We know what it’s like to be the tail and not the head. We know what it’s like to be beneath and not above…and that is what we went to work with every day because we know that had something special that we wanted to give the world…that we could be full human beings in the roles that we were playing. That we could create a world that exemplified a world we wanted to see.”

He went on to talk about working with the amazing cast, director, and producer and how he hoped that his acting peers could experience. “If you could experience that, you will be a fulfilled artist.”

He then went back to the second question: “Has it changed the industry?”

“It’s a pleasure to be celebrated by you, to be loved by you — one thing I do know of it changed the industry is that you can’t have a Black Panther without a ‘2’,” he said of the sequel to the $1.45 billion mega-hit.

Black Panther opened February 16, 2018 and has been a cultural phenomenon, grossing $242.1 million over that President’s Day weekend.

Also, backstage tonight, Boseman took the opportunity to veer away from sequels to heap praise on the designers, costumers and craftspeople who created Black Panther’s fantasy world of Wakanda. ‘”I would say I don’t think people truly understand the amount of detail, the amount of mastery that went into the hair and makeup, wardrobe, set design,” he said.

He added that pulling from the diaspora of African culture to weave the fabric of a new world was more difficult that simply re-creating a real period in history. “A lot of these things were built,” he said. “It’s not just special effects.”

The movie is up for seven Oscars this year led by Best Picture, and scored several craft noms including Production Design, Costume Design, Sound Editing and Sound Mixing.