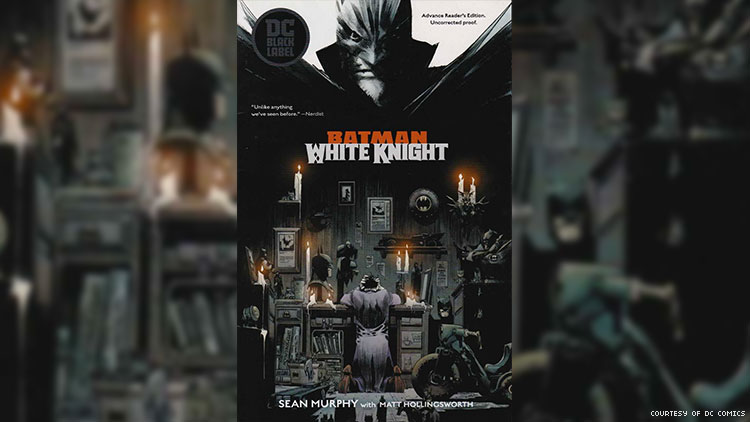 Batman: White Knight which appeared as a monthly mini-series and released by DC Comics as a trade paperback in October was one the best selling comics of 2018.

It's maintained a position on the New York Times bestseller list.

DC Black Label issued a second printing for Knight after the overwhelming reaction from fans for Murphy's unique take on the iconic character.

Knight is an extraordinary take and examination two of comics' greatest antagonists, Batman and The Joker. In a world where Batman has gone too far, The Joker, now cured of his insanity and homicidal tendencies, must save Gotham City and sets about trying to right his wrongs. The book is pulling in a wide array of readers as the story explores justice, corruption, activism and the depths of mental illness.

Batman and The Joker have long embodied the relationship of that mismatched twosome, a pair of opposites seemingly attracted by their outward disparities – Batman's dark, grim, but ultimately heroic nature has always been perfectly countered by The Joker's comedic but sinister villainy.

Murphy and artist Matt Hollingsworth deliver the ultimate lovers' quarrel in, but it's not just any quarrel – it's the final battle between two unhappy partners in a domestic relationship that's long been broken.

It's a game-changing confrontation that heralds the inevitable and dreaded conclusion that no one wants to face – as one side goes too far, it forces the other to make permanent and lasting move.

In terms of heroics however it's  The Joker making the first pivotal move – an attempt to cure himself of his insanity, to essentially try and light a spark in their dynamic – but it's met with resistance by Batman. Like half of a couple taking it upon themselves to unilaterally change in an attempt to better a relationship, Joker's actions inadvertently only worsen it, ultimately leading to what can fairly be described as a superhero/supervillain divorce.

Murphy's core premise for White Knight was to reverse the roles of Batman and the Joker by portraying Joker as the hero and Batman as the villain. His goal was to depict a more realistic take on Gotham City, where crime could not be stopped with a fist, i.e. Batman's methods. This led him to turn the Joker into a politician, using the character's intelligence and charisma to win the people of Gotham over.

DC Comics had no problems with the ideas that Murphy had for the series such as changing the timeline in Batman's history.However, the adult content like nudity and profanity that Murphy had intended to include were not permitted.

Murphy revealed that the Joker in White Knight has the real name Jack Napier, a callback to Tim Burton's 1989 Batman film where the Joker played by Jack Nicholson also shares that name.

The 1989 movie, along with Christopher Nolan's The Dark Knight Trilogy, also inspired Murphy's design of the Batmobile in White Knight.

One of White Knight's subplots involves one of the story's antagonists using a freeze ray to encase a portion of Gotham City in ice, a reference to the 1997 film Batman & Robin.

DC Black Label has already announced a second chapter in Murphy’s series called Batman: Curse of the White Knight, set to debut in 2019.