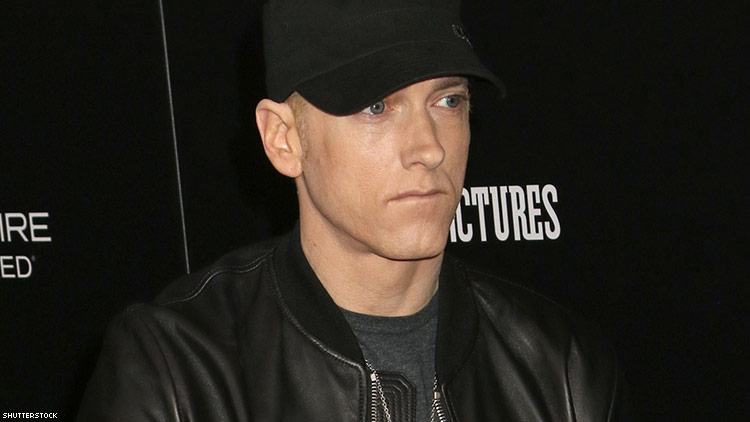 The "Fall" rapper acknowledged that by using the f word, "I was hurting a lot of other people."

Eminem has expressed regret for hurling an antigay slur at Tyler, the Creator in his latest album, Kamizake.

In the track "Fall," the rapper stated, "Tyler create nothin', I see why you called yourself a f*ggot, bitch."

The f word in "Fall" was bleeped. But it generated a storm of controversy on social media. Imagine Dragons front man Dan Reynolds and Bon Iver, who was sampled on the track, both slammed Emimen for again using "tired" and "hateful" language in his music.

About two weeks later, Eminem has broken his silence about the backlash to "Fall" in an interview with rapper and reporter Sway posted Thursday to YouTube.

“I was angry when I said the shit about Tyler,” said Eminem, who referenced Tyler, the Creator's harsh reviews of Eminem's music in the past. In 2014, the rapper tweeted that Eminem's album ShadyXV was "fucking ASS," adding, "why wont someone who loves him tell him NO."

Eminem revealed in the interview that his inclusion of the f word in the album bothered him, which is why he eventually decided to bleep it. While he does not regret clapping back at Tyler, the Creator, he acknowledged the pain to others he has caused.

“I think the word that I called him on that song was one of the things where I felt like this might be too far,” he said. “Because in my quest to hurt him, I realize that I was hurting a lot of other people by saying it.”

Eminem made headlines in 2013 for using the f word and other antigay language in his song "Rap God." After being criticized, he told Rolling Stone he doesn’t think the language is antigay but rather a generic insult, “like calling someone a bitch or a punk or asshole.”

Tyler, the Creator has faced criticism for using the f word in his own music. However, the rapper's lyrics have also fueled speculation around his sexuality. In his 2017 album Flower Boy, Tyler, the Creator rapped, "I been kissing white boys since 2004."

He later said on the Koopz Tunes radio show, "I had a boyfriend when I was 15 in fucking Hawthorne. ... If that's not open-minded, I don't know what is."

Watch Eminem's interview with Sway below. His remarks about the "Fall" controversy begin around 9:30.