He’s All About That Bass 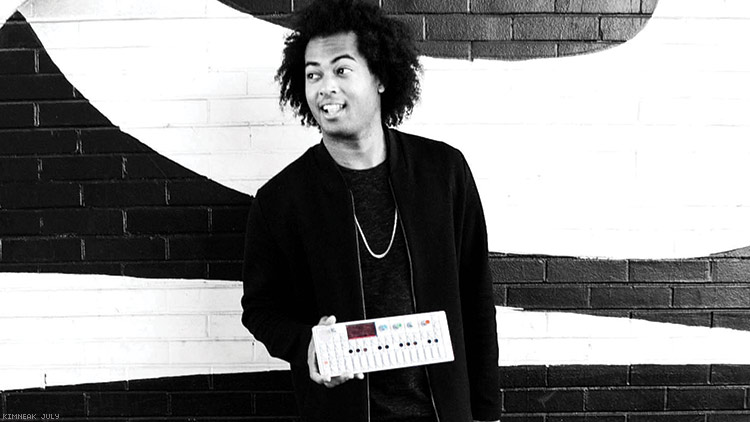 Bobby Wooten III has produced music for artists like J-Lo, and ads for Nike, Adidas, and Kith. Now he joins David Byrne on a world tour.

Tell us a little bit about your start in the music industry.
I was extremely fortunate to be born into a musical family. From day one, I was playing any instrument I could find. I honed my skills growing up in church, school band, voice ensembles, and my own bands with friends. I studied jazz bass performance… [but] I didn’t fully engulf myself in production until immediately following college.

Post-graduation, I lived at my parents’ house for two years in Chicago and created nonstop to the tune of over 800 songs — that was my grad school! I’m not going to say that my journey was easy or hard because I suppose there was, and still will be, moments of both. However, when someone is fueled by determination, what can really stop them other than themselves?

Your first big break?
I moved to New York City in 2013, and my first gigs were producing music for a sports agency. A year later, I performed my first Broadway show, Motown: The Musical, which opened many more doors for me as a bassist within the Broadway world. Throughout my production life, various events and people helped me to write [and] produce music for… some of the world’s greatest artists, such as Jennifer Lopez, Mac Miller, and David Byrne.

What inspires you?
I’ve always loved and been a fan of the superhero story. After watching movies like Black Panther, Spider-Man, and The Matrix, I always leave wanting to accomplish the seemingly impossible. This is also true after I read about or watch movies on some of the most successful humans that ever lived — Einstein, Quincy Jones, DaVinci. Their work ethic was insane. That’s what drives me. I’m a workaholic. After seeing Hamilton, I was like, Yes! This show gets it! Alexander Hamilton worked nonstop to leave his mark and legacy, and I plan on doing the same.

What is it like being a man of color as an instrumentalist?
I grew up in the suburbs of Chicago. I was often one of the few minorities in my honors classes and I felt a certain way about that all the time. But I had a mom and dad who told me I could be whatever I wanted to be, so I’ve embraced [my] differences, loving that I was both African-American and Puerto Rican. I knew the importance of individuality and uniqueness, and always sought after finding my own voice. I’m not sure how much discrimination I’ve really faced in the music world because most, if not all, of the “in demand” music comes from Black [or] Hispanic music. In some ways, music is one of the only fields one can benefit from being a minority. I see terrible representation at the Grammys, but that hasn’t affected me directly.

I can recall one experience that really altered my perception on race relations, which involved a young Barack Obama. I was a freshman in college when Obama was running. The media began to tear down his pastor, Jeremiah Wright, who happens to be my godfather. Jeremiah is, hands-down, one of the most brilliant people I have ever met — something I still believe Obama also feels. However, the media and Obama’s opponents made it such an issue that Obama had to denounce his own Black pastor over his stances. It opened me up to recognize new levels of racism that really involved tactics using misunderstandings and misrepresentation. I see this narrative all the time now, most recently with both the Colin Kaepernick situation and Black Lives Matter movement.

You’ve been able to work with some of the hottest artists around and compose for popular shows such as Empire. What has been your favorite project?
I’d like to say my favorite is whatever project I am working on, and there is some definite truth to that. For me though, the most magical and “goosebump moments” happen in the studio. I live for that. Seeing Jussie Smollet sing a song of yours while Forrest Whitaker bops his head on national television is quite a satisfying moment. I also recently scored the music for a Lebron James documentary and — this goes back to the inspiration question — my favorite moment was providing the underscore to Lebron James himself, speaking on what motivates and fuels him. He basically said his mom, friends, family, and I strongly cosign that.

Are there any behind-the-scenes moments you can share?
One of my first conversations with Terrence Howard involved the element phosphorus, how its complementary color is a light-blueish purple, and its shape is an octagonal-like figure. He believes math, science, and all things are connected. I rode an elevator with Taraji P. Henson when she shouted out “Photo shoot!” and her entire clique immediately pulled out cameras and snapped tons of photos of her. I was once unashamedly drooling while watching Nicki Minaj perform while Meek Mill [her boyfriend at the time] was right next to me.

What advice would you give other guys?
One life, one opportunity. Your story is yours to write.