Dawn Richard Etches Her Own Spotlight 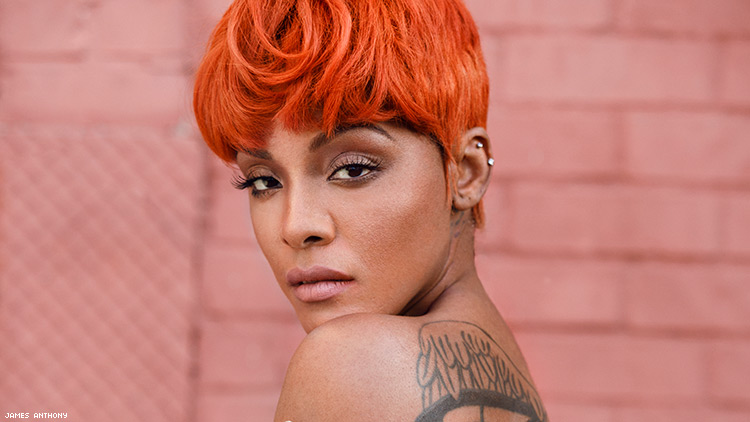 The former Danity Kane member talks about headlining at the first MOBI Fest, and a moment that changed her forever.

When it comes to celebrating the label-free, gender-free, and genre-free self, former Danity Kane member Dawn Richard is a true testament of that celebration. Richard has recently teamed up with MOBI, an organization dedicated to helping Black gay and queer men find their holistic selves, and is the headliner of MOBIFest, their inaugural wellness festival, taking place May 17-19 in New York City.

“What I want to do is be a part of a team of people who say, ‘It’s okay, come this way,’” Richard told Chill.

Alongside Dawn as the headliner, MOBIFest will also see performances from DJ B Major, DJ Adam R from Papi Juice, and ballroom curator Twiggy Garçon. Dawn’s highly anticipated set is sure to breathe life into the MOBIFest party. She hopes to bring every kind of person together and make them laugh, make them dance, and also leave them feeling more educated, particularly around sexual health and mental wellness.

Richard has been a long-time advocate of the LGBTQ+ community by providing free HIV tests at her concerts, hotlines and places to go for those who are bullied, and even clothing and shelter for fans at her festivals in NY and LA. So when she was approached by MOBI founder DaShawn Usher to partner up, it took nothing for her to say yes. Beyond what she was doing on her own, Richard talked about her search for a platform that wasn’t looking for major looks, but was honestly trying to affect change in their community, and that was MOBI to her.

“They want to protect, and have a space and a platform for the LGBTQ+ community to be able to thrive and be able to have the resources they need to really get through, especially in a time where hate crimes are at an all time high,” says Richard. “I think MOBI is special. It’s something admirable.”

Though Richard is no stranger in utilizing her platform to inspire goodness in the world, her life changed when she shared a special moment with a fan at one of her concerts: “I was privileged to speak with one of my fans who was in the Pulse Nightclub shooting, and he told me his story. It was one of the hardest things for me to hear. From that moment, (two years ago), it changed my perspective on what I wanted to do and what I wanted to be apart of.”

Working with MOBI, bringing communities together, and widening the conversation around sexual health in the Black community is something Richard is not letting go of so quickly either. She says, “for me this is not a one off, you know. MOBI is stuck with me now. Whatever I can do to help facilitate and be a part of this program, I want to do it, because I’m in it for the long haul.”

Our conversation begged the question: why is there such a disconnect in Black and Latino communities from sexual health and wellness, and why don’t we talk about it? Richard thinks the answer stems from culture and religion. And she’s not wrong. It’s incredibly taboo for us to speak on issues like sexual and mental health, because for many Black and Latino families those issues simply don’t exist. And that’s a problem.

“Black and Latino parents find it hard to accept their children who are queer or trans because of the culture we live in," Richard says. “More and more, there are so many young kids who are finding out early and accepting who they are but are so scared to do it because in school they’re being bullied, and from teachers to parents, they’re not talking to these children, and not talking to the youth. They’re not saying ‘it’s okay to feel what you are. Its okay to be who you wanna be.’ And we need more and more outside help to do that, because they don’t have their homes, or anyone in their immediate circles who are willing to help them.”

Both Richard and MOBI are hoping to change this narrative for Black and Latino communities, and believe social media will be instrumental in that change. Richard explains to Chill, “it’s so important to make sure that, even though we have all this access, it’s used for good, because a lot of times it’s not. The hard part is controlling what gets put out there, especially with cyberbullying. We have to facilitate and find an opportunity to show that social media can be benefited from if we use it in the right way.”

Richard believes that once we are able to get past that, social media can hopefully become a tool not to hurt, but to educate. “I think everything is about education, on all fronts. Whether straight or gay, whether fluid or trans, whatever you are, green, blue, orange -- there needs to be education for all parties on how to deal with certain circumstances, and right now there is a lot of ignorance, especially with social media.”

She believes we can label less, we may find that we are all so much more of the same person. “I’ve always been very open about that within the lyrics of my music, that it’s okay to be genderless, to be genre-less, whatever it is. It’s okay to have that dialogue and talk about it. It’s okay to refer to love in more than one idea of just man and woman. It’s okay for straight men to have friendships in the gay community, and not be labeled as gay. It’s okay to talk about these things.”

The first thing we can do is educate ourselves as a community, so we can make that first step in finding the openness to talk about the things that may scare us. Dawn Richard and MOBI are making great moves in seeing that this first step happens sooner rather than later.