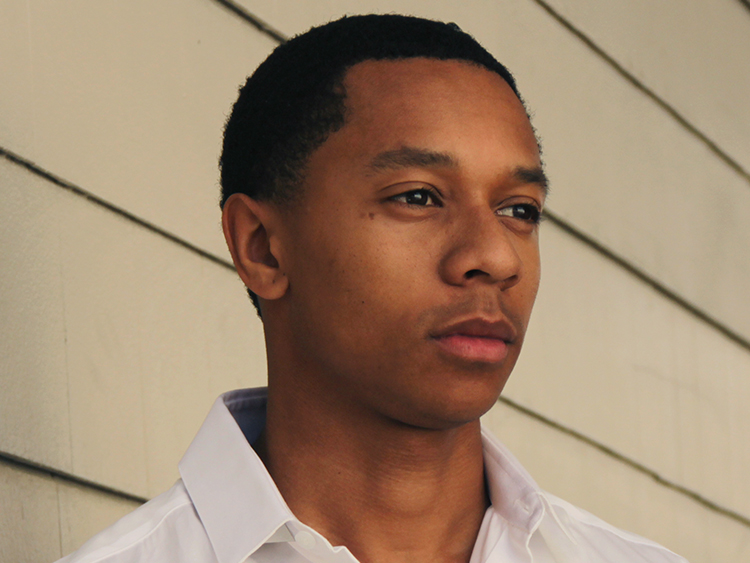 "My ultimate goal is to be one of the most diverse artists of our generation."

“I think it’s a great time for ethnicity,” says DeRon Horton, who plays the gay lead character Lionel Higgins on Netflix’s new series Dear White People, based on Justin Simien’s acclaimed 2014 film of the same name. “I think it’s a great time for us to express ourselves through art. When there’s controversy, we feel the need to come together. A lot of people want to speak up.”

When Simien’s movie was released three years ago, our divided America was still lurking under a politically correct veil, but the film dared to defy the notion of a post-racial Obama era. Dear White People was vital then, and its TV adaptation is perhaps more vital now, especially since it gives everyone—regardless of race, gender identity, or sexual orientation—a fair shake. It’s the kind of equal-opportunity art that can act as a salve. “It connects to all types,” Horton says. “Despite the title, it’s in no way directed toward any certain group of people.”

Created by Simien, the show revives the movie’s story about the sociopolitical tensions at a fictional chichi Ivy League university, and it brings back all the main characters, though many of them have been recast. In his breakout performance, Horton inherits the role of Lionel, a repressed gay student and aspiring journalist, from actor Tyler James Williams. He eagerly—and ambitiously—pursued the part. “My ultimate goal is to be one of the most diverse artists of our generation,” Horton says. “I don’t want to play characters who are so close to my own life. Plus, there aren’t just crack-dealer and slave stories that need to be told about us—there are African-American boys and girls who are struggling with their identities, and I love being able to share that story on screen, so they can see it.”

Horton was born in Houston, but when he was 10, his father’s job prompted his family to relocate to Saudi Arabia, where the actor experienced an isolation similar to Lionel’s in Dear White People. He says he was the only African American in his Saudi high school, which often left him flying solo and struggling to connect with peers over basic interests like music and food. But a decade later, when he opted to return to the States and study performing arts at the Savannah College of Art and Design, he felt grateful for the journey. “There were so many different ethnicities in Saudi Arabia that there was no room for prejudice or racism,” says Horton, now 24 and living in Los Angeles. “It showed me that you can’t be narrow-minded, and that you can fall in love with any group of people. I was introduced to so many different cultures, and if I didn’t go there, I don’t think I’d be where I am now.”

His family still lives overseas, and he says he visits often, but Horton is also busy building his career. In addition to Dear White People, he recently appeared in a Netflix film called Burning Sands, about a historically all-black fraternity and the hazing of five young pledges. Co-starring Trevante Rhodes from Moonlight (a movie Horton describes as “beautiful” and “a huge step in terms of a changing generation”), Sands explores the intra-community strife that can arise within black cultures, and how certain black men, as Horton tells it, can “have a hard time showing love for one another.” Again, it was a project to which the actor could apply his own life experience.

“We’re still somewhat segregating ourselves,” Horton says. “I’ve even been profiled by a black police officer.” He recalls one night in the South when he and a friend of Nigerian descent were locked outside the friend’s gate in his wealthy neighborhood. Apparently pegging them for burglars, the cop approached the pair with aggression, asked for ID, and began referring to them as “son” and “boy.” Says Horton, “You can have authority, but in certain situations you need to realize when terminology can be misinterpreted. And assuming we were robbing a house—that’s how problems start. That’s why shows like Dear White People are created.” He continues, “I hope people see themselves in Lionel Higgins. And I hope they see that we’re all trying to figure out what hurts others and what doesn’t in a changing society. We don’t talk about these things enough.”

Like what you see here? Subscribe and be the first to receive the latest issue of Out. Subscribe to print here and receive a complimentary digital subscription.