This Viral Video Tackles Trump and the N-Word 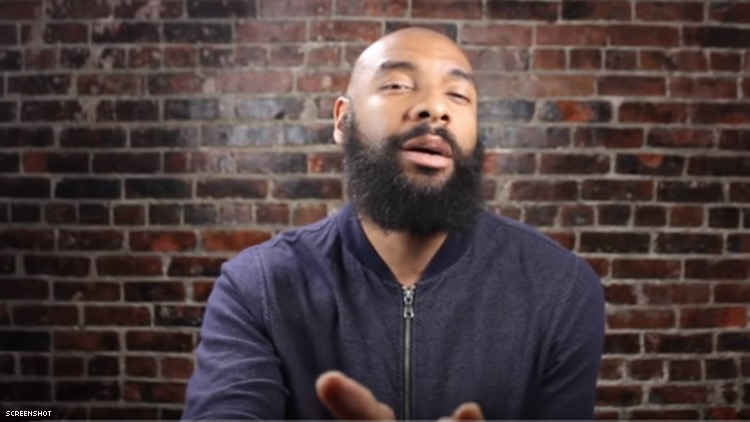 Ken Williams has been frustrated since Trump entered our political sphere so much so that when he became president Williams felt his ascension to power precluded his inclusion and he “felt instantly cheated out of all the promises I felt America had made to me about progress. And the reoccurring trauma for me has been realizing how whiteness plays a substantial role in everything. And for me it was when I was taking inventory on how whiteness has shown historical benefit and damage to our county did I realize that the only times I interpreted whiteness to provide benefit was actually when it was counteracting the damage that whiteness had already caused in some other way.”

Williams response was to create a riveting piece of performance art on YouTube called Hire The Ni**er. [Editor's note: the ** are not part of the official title.] The pot stirring title comes from William’s favorite line in the poem — and it’s most poignant. Williams had no intentions of deliberately fanning flames of contention he says the title stems from his “normal naming of conventions as what they are — I don’t sugarcoat it. Also whenever I create anything I usually name my creative work with a phrase already built-in the piece.”

Williams composed this poetic conversation to represent how he’s internalized Donald Trump’s political climb and his subsequent popularity. One of the earliest arguments in the poem questions Trump's qualifications and our misstep as a country to acknowledge and act on all of his dis-qualifiers. “The title speaks to the audacity of how obviously ill-equipped trump is to lead a country and it speaks to the audacity of our country’s leniency for allowing this to happen.”

Williams wants #HTN to be a nod to general conversations about privilege.

“I believe everyone behaves in certain levels of privilege, and I think that is key to a natural order of life that levels to privilege exist; however, the problem I found myself having with the Trump administration is that Donald Trump, who is someone that has historically weaponized his privileges, is now able to do so with the force of a Congress behind him that has already allowed for him to get away with so much. That is concerning for me.”

Williams felt it was imperative to use the n-word more so now than ever when it’s highly polarized. “I was nudged more than once by a force I believe to be greater than myself to be bold in my expression. The inspiration to create #HTN came in waves of headlines and Uber conversations that I found myself taking notes on, collecting them in a journal of sorts until there was no room to collect more evidence. I don’t believe there was a time when the n-word wasn’t highly polarized. I think it’s always been representative of the dichotomy that we have in this country of knowing that it still exists in the conversations of those we allow in power to govern us. There was a call for me to say and it out loud and demonstrate my ability to teach by having said it.”

What a Trump Administration means to Williams is that the “living document we call our constitution is dead — and it died the moment we as a nation began pretending that people like Trump see us as all, collectively as ni**ers. Rewrite it! The U.S. Constitution in its current condition is worthless. And I say that as someone who loves my country, as someone who has vouched for it when off the wall-shit has happened in our not so distant past.”

Williams hopes #HTN  makes people uncomfortable, adding, “It has been uncomfortable for me to feel this way about a country that I have loved so much too. I had to walk off a ledge to find myself the bravery to share this. So I hope people do cringe! And I hope what makes them cringe most about #HTN is knowing that nothing I said was far-fetched at all. I think to myself, the audacity of us to not want to orchestrate an immediate release from this administration.”

Last year, Plus (our sister magazine), wrote: "Through his personal journey with HIV, Williams seeks to convey the nuances of his experience, he explains, “so when the historians do their research, they will know that black gay men do exist, and that doesn’t make us vectors or predators or disposable — but vibrant, impassioned individuals thriving in a fear-based society with very little support.”

With #HTN he continues to do so.

Watch the video below.