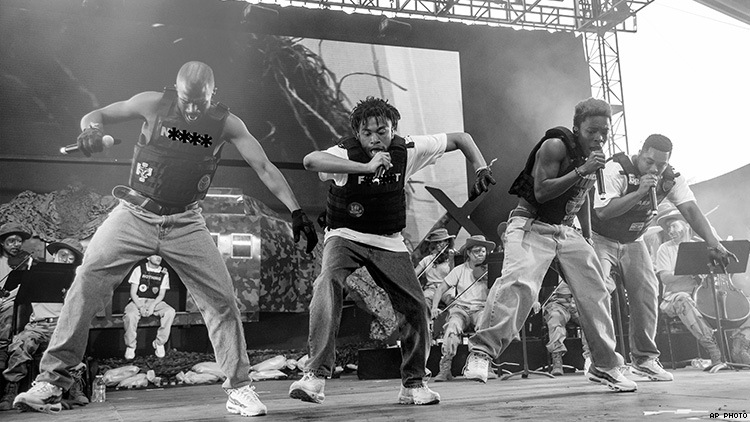 Brockhampton brings a rebellious edge to the typically vanilla genre.

Some young singers of color have always been a part of the boy band universe (think Jackson 5, Menudo, and Boyz II Men) but far more look like One Direction and N’Sync. And mixed-race bands haven’t always thrived. But Brockhampton is doing just that and more — they’re scratching the surface of true stardom.

Four years after forming in San Marcos, Texas, the group of seven (only two of whom are white) is now L.A.-based and going full steam ahead for their dreams. With an off-balanced blend of in-your-face raps mixed with pop melodies, the guys are bringing their individual skater-punk qualities to the airwaves.

Last year, they dropped three albums. The latest, Saturation III, debuted at No. 15 on the U.S. Billboard albums chart, and was featured in Brockhampton’s 22-minute short film Billy Star. The group even had their own episode, “American Boyband,” on the TV series Viceland. Brockhampton performed to high acclaim at this year’s Coachella Valley Music & Arts Festival, wearing vests embalazoned with the the N and F words. For the group’s Black gay front man, 21-year-old Kevin Abstract, that’s just the beginning. “I want people to look back like, ‘Damn, Brockhampton did all of that in a very short amount of time and inspired so many people,’” Abstract told The Guardian this summer.

The other band members (Merlyn Wood, Joba, Matt Champion, Dom McLennon, Ameer Vann, and Romil Hemnani) are on board with changing the cookie cutter perception of what a boy band is.

“The whole point is to redefine it so that a group of kids who look more like us and less like One Direction could be like, ‘I want to be in a boy band. I’m-a do that,’” Abstract said in the same interview. “NWA was all-American, Wu-Tang was all-American. It was just a part of America you may not have seen at the time. And I feel like a Merlyn Wood verse, or an Ameer Vann verse, or Dom, their perspective is just as American as the white kids I went to school with who shot guns and killed animals on the weekends. We’re darker than other boy bands and we suck dick, but we’re still very American.”