Why Is America Afraid of Black Men? 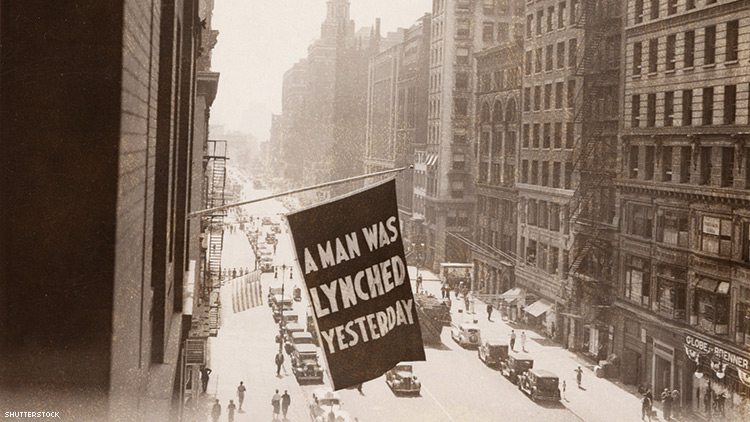 America, being black is now a crime. Why?

In 1959, Miles Davis dropped Kind of Blue, the best-selling jazz album of all time. That same year, he continued to suffer racist abuse. During a gig at a New York City nightclub, Davis stepped outside for a smoke and to escort a friend to a taxi. A police officer reportedly came up and told the musician to “move along.” Davis explained that he was simply taking a break. The officer clearly didn’t recognize the young jazz master — or didn’t care. He jabbed Davis in the stomach with his baton. Other police joined in to beat Davis before they finally arrested him. Some speculate that Davis caught the officer’s attention because the friend he was escorting to the taxi was a white woman.

Only four years earlier, Emmett Till had paid the ultimate price when a white woman claimed the 14 year-old whistled at her. Last year, that same woman finally admitted to lying about the incident.

Many whites on all sides of the political spectrum want to confine such ugly, blatant racism to the past, or to a world they believe no longer exists. Some have even tried to replace #BlackLivesMatters with #AllLivesMatters, calling the former exclusionary. After all, Jim Crow no longer exists, right? Wrong.

We may have erased the laws, but clearly not the attitudes behind them. White America still maintains an outsized fear of Blacks in general, and of Black men in particular. James Baldwin’s call for white people to engage in soul searching about their attitudes towards Black folks (right) — which gained new relevance in 2016 when the statement was included in Raoul Peck’s Oscar-nominated documentary I Am Not Your Negro about the late Black gay writer, poet, and social critic — has yet to happen in any universal way.

If anything, over the past several years a portion of American society has doubled down on their animosity toward Blacks. In this digital age, Jim Crow has morphed into hashtags. #BBQBecky and #PermitPatty are colorful names that mock racist pedants, but the actions they describe represent an escalation of white people empowered to use the police as a weapon against Blacks when Blacks “step out of line.” (Or simply appear in public spaces that certain whites, emboldened by Trump, now claim exclusive dominion over.)

Harsher examples include a woman in liberal Santa Monica, Calif., who called the police because she saw a “large black man” breaking into a neighbor’s house. It turned out to be famous actor Ving Rhames accessing his own home. More tragically, in Dallas, an off-duty police officer walked into Botham Shem Jean’s home and shot him dead, allegedly mistaking his apartment for her own and his “large silhouette” for an intruder. Jean was reportedly watching football in his living room.

I call this the era of #LivingWhileBlack, where our mere existence can get us into trouble. We can’t hang in Starbucks. We can’t barbecue in a public park. We can’t sell bottled water. We can’t take naps in dorm common rooms. We can’t exist peacefully in our own homes. In spaces public and private, Black lives are highly regulated. Jim Crow now has superpowers. And the justifications for this treatment remain the same: “large Black man.” The myth of the Big Scary Black Man lives on. Of course, at this point Black women and even children are too often viewed as threats as well, proving just how overblown this fear of Black people is.

How did we get here? American society failed. It allowed its racist id to take over. We elected and reelected a Black man president. For eight years, a Black family lived in the White House. And some people lost their shit. They saw Barack Obama — young, handsome, intelligent, highly educated — as the ultimate Big Scary Black Man, an existential threat. For non-college educated, blue collar white men in particular, he represented everything they were not and exposed their fears that people of color are ascendant (“taking over America”).

To counter that threat, far too many white people in the country happily voted for Donald J. Trump, a man who has done his utmost to delegitimize President Obama by questioning everything about him — from his degrees to his citizenship. Not viewing Blacks as Americans is an old saw, while putting “America first” is all about keeping white men in power. “Make America Great Again” simply harkens back to a time when Black disenfranchisement was a given. Unleashing Trump has uncorked a torrent of hate speech, actions, and crimes against Black and brown people, women, Muslims, and the LGBTQ community. Outsized fear of Blacks helped to bring an unstable bigot to the pinnacle of power. That’s failure.

Fifty years after Baldwin’s statement, his words continue to ring true. Too many white people still need a “n***er.” Few realize it. Fewer acknowledge it. And fewer still challenge it. Too many, on the left and the right, blame the attacks against Black people on Black people. That’s how racism works. Black people aren’t perfect, but we shouldn’t have to be perfect to receive respect and due process under the law. Or to simply be allowed to be in public spheres without fearing attack or arrest.

As my mother once exclaimed while talking about some racial inequity of the day, “We must have the right to be human beings!” Outsized fear continues to deprive us of that right.