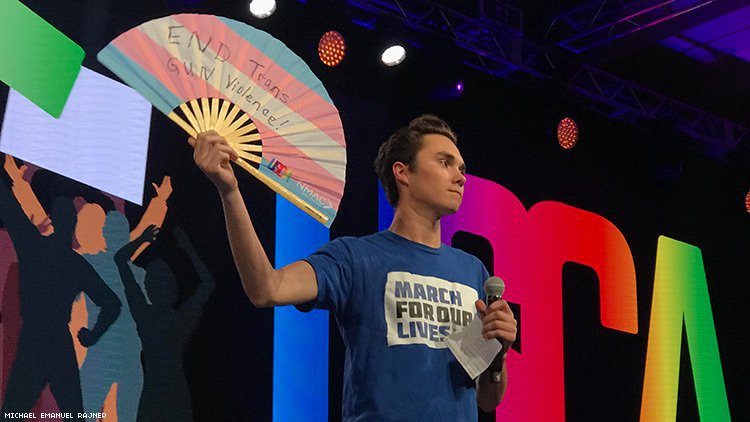 The Parkland massacre survivor and #MarchForOurLives founder took the stage at the opening plenary of the United States Conference on AIDS.

Holding a fan emblazoned with the colors of the trans pride flag that read "End Trans Gun Violence" Parkland Massacre survivor David Hogg and #MarchForOurLives founder took the stage at the opening of the United States Conference on AIDS (#USCA2018) in Orlando last week. “We’re more upset about a pair of shoes than gun violence... or HIV/AIDS.” Hogg said in his remarks. The statement on Hogg's fan stems from the fact that virtually all of the murders against trans women over the last few years have been by gun fire.

The nationally known anti-gun violence activist has become a national figure and attracts concert sized crowds around the country.

Hogg is not the first Parkland survivor to use his platform and significant social media following to alert them of the current HIV crisis. Cameron Kasky joined amfAR, The Foundation for AIDS Research, which is dedicated to ending the global AIDS epidemic through innovative research's #BeEpic campaign to raise money to fight AIDS.

In a statement released last week, NMAC announced that prominent entertainers and veterans as well as younger activists of various progressive movements would be participating in the opening plenary session as well as in later sessions.

“Our opening plenary is focused on the importance of activism,” said NMAC Executive Director Paul Kawata in a statement published in The Washington Blade. “Activism in the fight against HIV intersects many communities: youth, LGBTQ, elders, and communities of color,” he said. “We want to show how different activist movements can intersect with the fight against HIV and strengthen our forces for change.”

New York magazine said recently, "A lot of what has catapulted Hogg to this elevated and precarious place is his wonkishness: his dexterity on social media and cable news, his appetite for the nitty-gritty of policy disputes. He is aware of the way his particular talents mesh with how his generation thinks. “It’s like when your old-ass parent is like, ‘I don’t know how to send an iMessage,’ and you’re just like, ‘Give me the fucking phone,’ ” he told a young journalist two weeks after the shooting. At the march, he hung an orange tag stamped “$1.05” off the microphone: It was the price the Parkland students calculated that their senator, Marco Rubio, put on each of their lives, given the donations he’d accepted from the NRA. (At graduation, he attached it to his mortarboard like a tassel.)

Hogg’s Twitter feed is a study in narrative discipline, its relentless focus on the politicians who accept gun-lobby money twinned with exhortations to his nearly 900,000 followers to vote. “People call us snowflakes,” he tweeted earlier this month. “What happens when all the snowflakes vote? That’s called an avalanche.”

Entertainment
There's a Reason We Want Michael Twitty to Cook Us Dinner
2:29 PM