'Heroes In Crisis' and New Issue of 'Watchmen' Sequel Released

"Can I tell you a secret Goldie?" Harley Quinn says to Booster Gold, early on in the first of issue of Heroes In Crisis —  DC's new company-wide crossover series — "You promise not to tell?" Harley continues seductively, "I hate pudding."  Here, Quinn is referring to both the options on the dessert menu at the diner she and Gold find themselves in, and we assume her on again/off again boyfriend The Joker, for whom "puddin' " is her trademark term of endearment.

Turns out the duo — as unlikely a pair as you can find — have been secretly operating "the Sanctuary," an ultra-secret hospital for superheroes who’ve been traumatized by crime-fighting and cosmic combat. And that's just the tip of the house-sized mysteries  suggested in the the first issue of Heroes In Crisis. A mass-shooting massacre is at the center of C.I.A.-operative-turned-comics-writer Tom King's story, where he poses the question: How does a superhero handle PTSD?

King has proved his writing mettle with his still ongoing, award winning runs on both Batman and Mister Miracle. He continues to be able to oscillate between both the incredibly cosmic (Batman and the Justice League against a New God) and masterfully grounded stories (like Bruce Wayne serving on a jury attempting to convict the Batman of assault against Mr. Freeze).

In Crisis, King deftly maneuvers between humor and heavy emotion — juxtaposing scenes like Blue Jay confessing that sometimes he can't grow to full height with heart wrenching ones, like when the DC Trinity of Superman, Wonder Woman, and Batman discover the murdered bodies of their protégés, the Teen Titans.

The term "crisis" is a storied one in DC lore, stemming back to the 1960s when the Justice Society of America (JSA) from Earth-2 (containing DC's 1940s golden age characters) and the Justice League of America from Earth-1 (the JLA we know essentially know now) would team up against odds that only the two greatest superhero teams in the multiverse could combat.

In the DC Universe (DCU), the term Crisis has become a brand that consistently brings the greatest crossovers year after year. With Heroes, King takes that concept and does something truly original and cinematic.

Doomsday Clock No. Seven Sets the Countdown in Motion

Given the rabid fan reaction to the countdown to the end of the universe that Doomsday Clock —  the DCU's other ongoing crossover and official sequel to Watchmen — promised to deliver when it debuted nearly two years ago (it's been super-behind schedule); the series' narrative has been sluggish thus far.  But issue 7 finally makes dramatic leaps and we get much closer to its conclusion, with the primary antagonists finally confronting Dr. Manhattan. 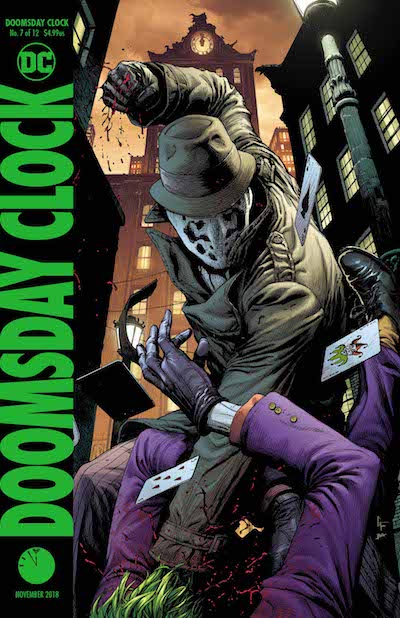 Writer Geoff Johns continues his to astound with his ability to mix the greatest hits of the DCU with modern twists (Batman, The Joker, The Comedian, Owlman,  Ozymandias, and the new Rorschach all blend perfectly), but stumbles a bit attempting to evoke writer Alan Moore's classic Watchmen number four — which was narrated by Manhattan. In Moore's much more capable hands, the narrative is riveting and intriguing — as Manhattan is experiencing all space and time at once — but in John's hands it's sometimes confusing reconciling exactly what is happening when.

That said,  it's still a great ride and we see a bigger reveal of the new universe Manhattan's created and a suggestion that there may be someone even more powerful than Superman controlling the heroes' strings.

Below check out the three variant covers for Heroes in Crisis. 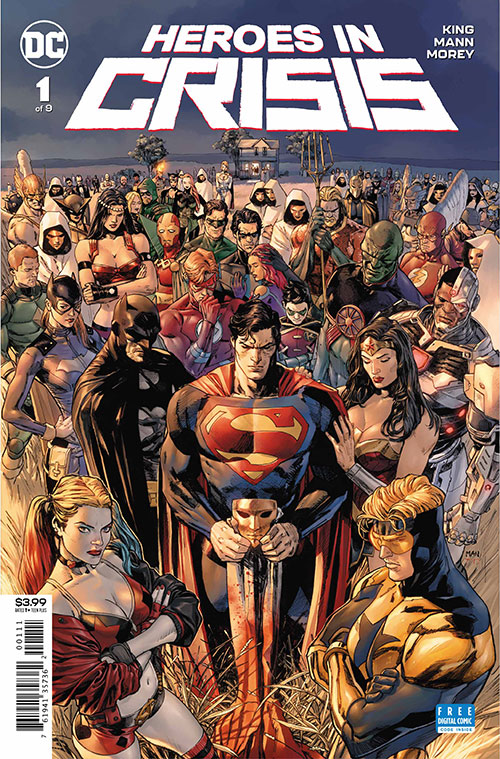 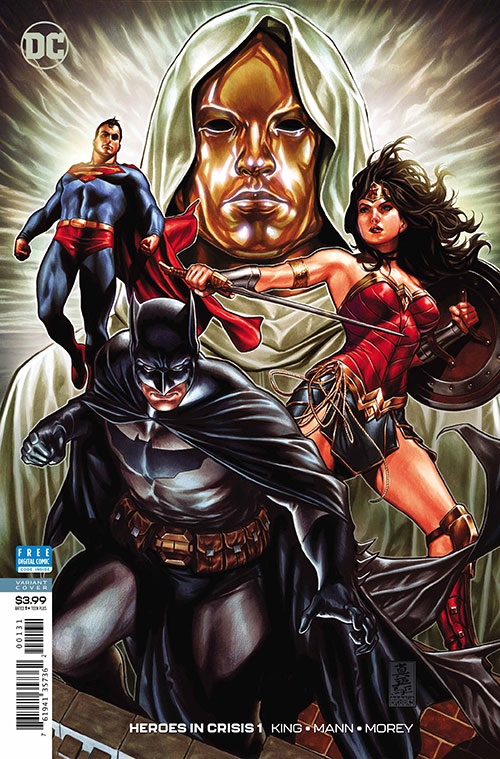 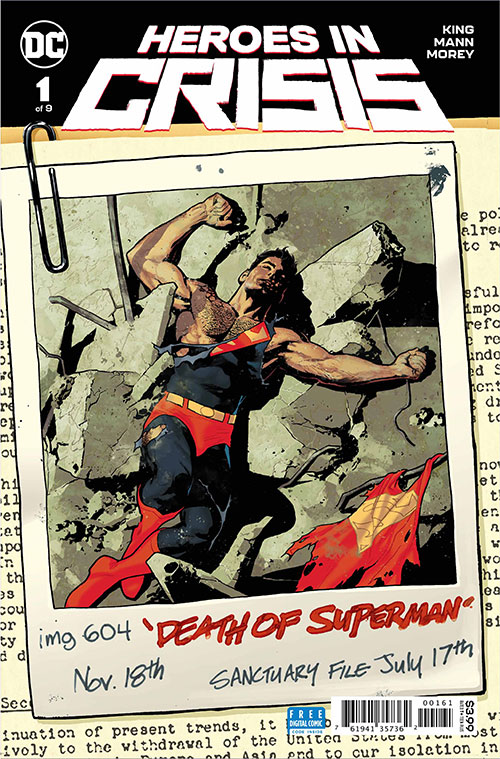